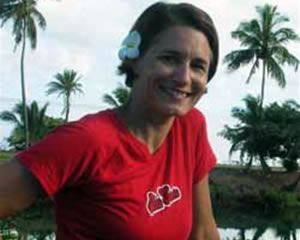 COLUMBUS, Ohio -- How well ocean reefs recover from the growing damage caused by warming sea temperatures depends both on how much the tiny coral polyps can eat, and how healthy they can keep the microscopic algae that live inside their bodies.

New research intended to dissect one of the planet’s most fertile and endangered ecosystems may change the way scientists look at this symbiotic partnership, shifting it from a case where the polyps function only as landlords to one where the tiny creatures actually nurture their algae.

Preliminary findings were presented today in two papers at the 2008 Ocean Sciences meeting in Orlando. The research focuses on the key role that carbon plays on the recovery of damaged coral reefs.

Andrea Grottoli, an assistant professor of earth sciences at Ohio State University, has spent the last 14 years studying two common forms of coral that populate the reefs near the Hawaii Institute of Marine Biology.

Two years ago, she reported that one of the corals she tested, Montipora capitata, or “rice” coral, was able to recover rapidly from bleaching because it increased its rate of feeding five-fold compared to how fast another form, Porites compressa, or “finger” coral, fed.

This strategy of gluttony enabled Montipora to survive the long-term damage that corals suffer when sea temperature climbs beyond the narrow 4 – 6 degree C range, where Porites might not.

What wasn’t clear from the earlier experiments was how the corals actually made use of carbon for their survival.

“Corals get carbon in two ways,” she said, “either through photosynthesis by the algae kept inside their bodies, or by feeding on the zooplankton that comprise their diets.”

While corals can get all the carbon they need from the algae’s photosynthesis, “they still get some of what they need through normal feeding.”

But when seawater temperatures climb, the coral will either jettison the algae altogether, or the algal cells will lose the pigments essential for photosynthesis to deliver the needed carbon. Without the algae, corals appear white, which is often referred to as “bleached.” Prolonged bleaching can lead to the coral dying. Either case presents a serious threat to the tiny creatures.

Grottoli wanted to determine exactly how the coral obtained its carbon and, in turn, how it used the material to survive. She placed samples of both healthy and bleached corals of both types in tanks mimicking actual ocean conditions. In one set of experiments, she pumped in seawater containing higher-than-normal levels of a carbon isotope, C-13. In another, she fed the corals zooplankton that were also heavily laced with the carbon isotope.

“We could track the carbon and determine if it was coming from either the photosynthetic process or from the animals’ feeding,” she said, “and then see how it was ultimately used by the animals. We could tell whether the process differed if the corals were healthy or bleached, or one species or the other.”

The experiments readily showed, as expected, that healthy corals had much more of the seawater-labeled carbon than did bleached corals, she said.

“But we could also see that in the healthy coral, the carbon was transferred into the algae where it is used for photosynthesis, and ultimately ends up in the animals’ skeleton,” Grottoli said. “So the corals are using photosynthetic carbon for calcification and to meet their daily metabolic demands.”

The carbon consumed while feeding, however, isn’t ending up in the skeleton, she said. Instead, it’s ending up both in the tissue of the coral polyp or inside the algae. With bleached samples, the coral is apparently feeding carbon to the algae.

“That’s what our work suggests and this is new. We’ve known that nutrients like nitrogen and phosphorus are exchanged in this way but nobody ever knew that this was happening with carbon,” she said.

“This suggests that there is a great deal more coupling between the coral and the algae than we had thought. Once the coral gets the carbon from feeding into its system, it locks it in, using it for energy storage and tissue growth, and when bleached, to feed the algae.”

The bottom line, Grottoli says, is that the photosynthetic carbon is used for metabolic demands and calcification, while the carbon gained from feeding is used for tissue growth.

“Without both forms, the coral simply cannot fully recover,” she said.

“All corals need both photosynthesis and feeding for recovery and the rate of those two processes is the key to whether the coral can actually meet all its metabolic demands and ultimately recover.”