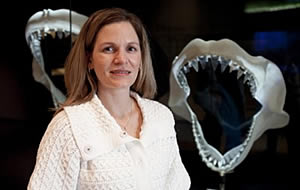 GAINSVILLE, Florida -- Shark attack! These words can send waves of fear through the public and often guarantee prominent coverage in the news media — even if the bite is little more than a scratch.

To better communicate the actual severity of the bite, University of Florida researchers have created a grading scale, similar to how burn severity is ranked by degrees. The new scale is detailed in this month’s The American Surgeon.

UF researchers reviewed the 96 cases containing complete medical records from more than 4,000 entries in the International Shark Attack File, a record maintained by UF’s Florida Museum of Natural History. Assigning scores to clinical findings such as blood pressure, location and depth of injury, damage to organs, and death, the team created a scoring system called the Shark-Induced Trauma Scale, or SIT Scale.

“If it’s just an extremity and it’s an abrasion, it’s just a Level I injury,” Lentz said. “If a shark comes up and takes a big bite out of a thigh and takes out the femoral artery, then that’s a life-ending bite — pretty quickly — and you are talking about a Level V injury.”

The new shark bite severity scoring system creates a standardized way for medical personnel to assess patient risk and for researchers to evaluate trends, as well as offers a consistent method for media and officials to communicate the impact to the public.

In the article, UF researchers cite a Level III injury example of a 35-year-old man who had been swimming approximately 30 yards offshore. The shark bit into the muscles of his calf and foot. He was hospitalized for a couple of months because of an infection and underwent three reconstructive surgeries.

Although public perception may be that most shark attacks are deadly, most are minor. Those resulting in small lacerations account for more than 90 percent of injuries in Florida, according to co-investigator George Burgess, director of the Florida Program for Shark Research and curator of the International Shark Attack File. Analysis shows that worldwide there was a per-year average of 63.1 attacks resulting in 3.8 deaths between 2002 and 2007.

UF Trauma Medical Director Dr. Lawrence Lottenberg, who contributed to the research, said the scale provides physicians with a common language. He added that the UF team wants to get the word out about the grading scale to coastal emergency providers such as lifeguards, EMTs, emergency medicine physicians and trauma surgeons.

“A scoring system that can accurately describe the severity of a shark incident will help educate the public to understand that most bites are mistaken identity and that people are not on sharks’ menu,” said Volusia County (Fla.) Beach Patrol Capt. Scott Petersohn, who did not participate in the research. “The idea of being attacked in the ocean by an unseen predator stirs a very deep emotional response from most people.”

Petersohn added that in Volusia County several very minor bites are recorded each year, with most occurring in a remote area in New Smyrna Beach that normally has many factors thought to contribute to shark bites, including murky water and an abundance of bait fish.

Lentz said next steps include using the grading scale to evaluate trends, and looking more at wounds and bacteria from sharks’ mouths to clinically better predict who may have trouble with infections.

UF researchers also hope use of the grading scale by the media and others will add perspective and enhance the maligned reputation of sharks.

“One of the things is to get the message out that the majority of shark attacks are minor and you don’t need to go around slaughtering and killing sharks because they really are a valuable part of our ecosystem,” Lentz said. “You really do not want to upset the ecosystem, but that is what is happening.”

Burgess said he hopes the scale will add perspective to the situation in that Level I and II injuries are most common; very rarely do Level IV and V attack occur.

“It is the risk we take when we engage in the wilderness experience – going in the sea is the wilderness. Happily for us it is a pretty benign environment,” Burgess said.