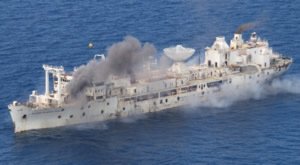 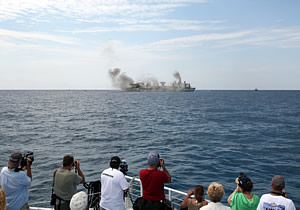 The sinking of the Vandenberg as observed from the bow of the Fury Catamaran. credit Carol Tedesco / UnderwaterTimes.com

KEY WEST, Florida -- The highly anticipated placement of the world’s second-largest ex-military ship as an artificial diving and fishing reef, near Key West, is finally a reality. The Florida Fish and Wildlife Conservation Commission (FWC) worked closely with its many project partners to successfully deploy the decommissioned military ship “Gen. Hoyt S. Vandenberg” at 10:24 a.m., May 27.

Thousands of delighted onlookers watched as 44 carefully placed explosive charges were detonated to blast holes in the hull of the 523-foot vessel. It took just one minute and 54 seconds for the “Vandenberg” to slip below the water's surface and settle right-side-up, on the sea bottom, at a site about 7 miles south-southeast of Key West, in 140 feet of water, in the Florida Keys National Marine Sanctuary.

The FWC’s Division of Law Enforcement took the lead in working with the Navy, Coast Guard, Key West Police and Monroe County Sheriff’s Office, as well as local fire and rescue officers on offshore security operations throughout the entire sinking event.

FWC divers are working with a team of other underwater specialists to survey the ship to ensure it is safe for public diving. Other divers are retrieving more than 20 cameras that were mounted on the ship to capture images of the “Vandenberg” as it sank, and another team, led by Keys Sanctuary staff, is securing mooring buoys near the ship. Officials indicated the ship may be ready for public diving by Friday morning.

According to the FWC, the “Vandenberg” will provide recreational diving, ecotourism and fishing enhancements to the Florida Keys and provide a needed lift to the economy of Key West and its neighboring communities.

The colorful vessel was commissioned in 1943 as a World War II troop transport ship, and it later became a missile range instrument ship in the 1960s, defending against missile attacks and tracking rocket and early space shuttle launches.

The ship was placed in the Florida Keys National Marine Sanctuary near Key West to help divert fishing and diving pressure away from natural reefs near the ship. The FWC estimates the vessel’s minimum 100-year lifespan will contribute stable, long-term habitat for scores of marine fish species and provide exceptional diving and fishing opportunities for Florida residents and visitors from around the world.

According to National Oceanic and Atmospheric Administration projections, the "Vandenberg" artificial reef will result in an annual increase of about $7.5 million in expenditures in the Monroe County economy, and will create about 195 full- and part-time jobs.

The FWC played a major role in providing funding and technical assistance for the “Vandenberg” project since early 2001, including helping the City of Key West secure permits for the ship and performing numerous inspections of the vessel while it was being readied for its safe deployment.