Study: Law That Regulates Shark Fishery Is Too Liberal; 'It Does Not Prevent Waste Or Overfishing' 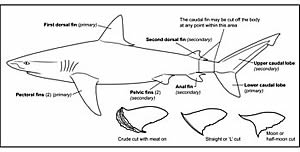 Shark fins are worth more than other parts of the shark and are often removed from the body, which gets thrown back into the sea. To curtail this wasteful practice, many countries allow the fins to be landed detached from shark bodies, as long as their weight does not exceed five per cent of the total shark catch. New University of British Columbia research shows that this kind of legislation is too liberal.

A study published this week in the journal Fish Biology analyzes the fin to body weight ratios for 50 different shark species. The authors find the average fin to body mass is three per cent – considerably lower than the five per cent ratio currently legislated by the EU and other countries.

"The five percent ratio provides an opportunity to harvest extra fins from more sharks without retaining 100 per cent of the corresponding shark carcasses," says Sea Around Us Project researcher Leah Biery, lead author of the study. "It does not prevent waste or overfishing, as the law intended."

Currently, the EU and eight other countries use at least a five per cent shark fin to body weight ratio for landed catch. Only 59 countries in the world have any legislation related to sharks.

"Sharks are sensitive to overfishing and it's embarrassing how little we have done to protect them," says Daniel Pauly, principal investigator of UBC's Sea Around Us Project and co-author of the study. "We would like to see more science in the management and protection of sharks in the coming years."

Researchers estimate about 26 to 73 million sharks are killed each year to feed the growing demand for shark fin. Sharks are sensitive to overfishing because they often grow slowly, mature later, and have very few offspring.

Canada MP Fin Donnelly introduced a bill last December that would ban the import of shark fin into Canada, but it has not been voted on. The Canadian municipalities of Brantford, Mississauga, Oakville, Pickering, London and Toronto have all banned the sale and possession of shark fin.