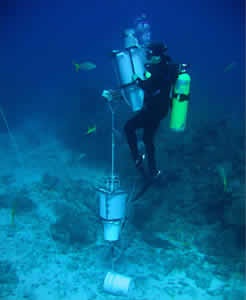 MIAMI, Florida -- When David Jones, a fisheries oceanographer at the Cooperative Institute for Marine and Atmospheric Studies (CIMAS) located at the University of Miami's Rosenstiel School, set out to design a better light trap to collect young reef fishes, he never imagined his invention would contribute to the discovery of a new species. But, after finding a goby that didn't quite fit any known description, his catch turned out to be the answer to another scientist's twenty-five-year-old research conundrum. The larval stage captured in Jones's new trap was matched to the adult form of a previously unknown species of reef fish by new DNA barcoding technology—which confirmed both were members of a new species.

Jones and his team deployed his new light traps in the deep tropical waters surrounding Banco Chinchorro, a remote coral reef atoll off Mexico's Costa Maya which was recently designated as a Marine Biosphere Reserve. The traps capture fish larvae in a manner similar to a fisherman's minnow trap, but attract them with a programmable lighting system enclosed in a submersible housing. The lights entice marine organisms to enter the trap “like a moth to a flame”. Jones's innovative trap intercepts fish returning to the reef at the end of their journey as larvae through the treacherous waters of the open ocean. This allows researchers access to species normally inaccessible by traditional sampling methods, such as those that occupy deep recesses within the reef as adults.

“Working with scientists from El Colegio de la Frontera Sur (ECOSUR) in Mexico, we retrieved the nightly catches of the light traps each morning. The traps performed well, collecting live specimens from a diverse range of reef fish species. Each evening we meticulously sorted and identified our catch, using a microscope to count fin rays, scales, and bones and examine pigmentation patterns that distinguish species. I came across one specimen of goby that wasn't quite right,” said Jones.

That individual differed slightly from the known species of Atlantic gobies by having fewer fin rays and lacking a frenum, the small fold of tissue in the pelvic fins of most gobies that forms a sucking disc for grasping the substrate. The fish was sent to Dr. Benjamin Victor of the Ocean Science Foundation in California, who used a new biochemical technique known as barcoding to match DNA from the larva to an adult fish Victor himself stumbled upon a quarter of a century earlier in Panama. Testing confirmed that the fish was in fact a new species, genetically different from its closest know relatives by about 25%. The specimen in Jones's trap turned out to be a Coryphopterus kuna, a new species of goby named after the indigenous people of Panama.

This discovery marks the first vertebrate to have its genetic barcode included in its original species description, which was published by Victor in the July 2007 issue of Zootaxa. The process involves identifying and isolating a section of an organism's mitochondrial DNA to allow researchers a simple and definitive method of recognizing and categorizing existing species by assigning each a unique, searchable DNA barcode.

“DNA barcoding allowed me to match the larva to the adult...[and] prove to the other fish biologists that this was a new species,” said Victor.

Jones's project was funded by the National Oceanographic and Atmospheric Administration (NOAA), in collaboration with CIMAS, based at the University of Miami's Rosenstiel School.