Satellite Trackers To Delve Into Diet Of Emperor Penguin Chicks; 'We Will Be Able To Record From Their Very First Dive'

UN: Global Seafood Industry Must Adapt To 'Greener' Fish; 'The Way Of The Future' 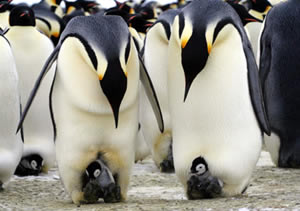 WOODS HOLE, Massachusetts -- Popularized by the 2005 movie “March of the Penguins,” emperor penguins could be headed toward extinction in at least part of their range before the end of the century, according to a paper by Woods Hole Oceanographic Institution (WHOI) researchers published January 26, 2009, in Proceedings of the National Academy of Sciences of the United States of America.

The paper, co-authored by five researchers including WHOI biologists Stephanie Jenouvrier and Hal Caswell, uses mathematical models to predict the effect on penguins of climate change and the resulting loss of sea ice.

The research indicates that if climate change continues to melt sea ice at the rates published in the latest Intergovernmental Panel on Climate Change (IPCC), the median population size of a large emperor penguin colony in Terre Adelie, Antarctica, likely will shrink from its present size of 3,000 to only 400 breeding pairs by the end of the century.

What’s more, the researchers calculate that the probability of a drastic decline (by 95 percent or more) is at least 40 percent and perhaps as much as 80 percent.

Such a decline would put the population at serious risk of extinction.

“The key to the analysis was deciding to focus not on average climate conditions, but on fluctuations that occasionally reduce the amount of available sea ice,” said Hal Caswell, who is noted for his work in mathematical ecology.

Sea ice plays a critical role in the Antarctic ecosystem – not only as a platform for penguins to breed, feed, and molt, but as a grazing ground for krill, tiny crustaceans that thrive on algae growing on the underside of the ice. Krill, in turn, are a food source for fish, seals, whales, and penguins.

One fluctuation and subsequent sea ice reduction in Terre Adelie during the 1970s led to a population decline in emperor penguins of about 50 percent.

The team led by Caswell and Jenouvrier developed a series of models to incorporate the effect of the fluctuations on the penguin life history and population growth or decline. The models used data collected by French scientists working in Terre Adelie beginning in the 1960s. Then, working with climate scientists, Jenouvrier, Caswell and their colleagues looked at IPCC climate models and found that these fluctuations are likely to become much more frequent as the climate changes over the next 100 years.

Because Jenouvrier and Caswell’s models were based on fluctuations rather than smooth trends, and because different IPCC models differ in their forecasts of future Antarctic climate, the results of the analysis incorporate uncertainty in the details of the future population growth, but the conclusions are not uncertain. “If the future behaves anything like the IPCC models predict, the Terre Adelie population will decline, probably dramatically,” said Jenouvrier

Certain predictions even suggested that the geographic range of Antarctic penguins may shrink following climate warming because the continent limits their movement south. Over the last 50 years, climate change has been most pronounced in the Antarctic Peninsula, where Terre Adelie is located. In the future, the Ross Sea—where sea ice actually has increased in recent years—may be the last sanctuary for penguins.

The WHOI research raises several questions for Antarctic researchers and those interested in conservation of penguins. One is what the march of this population toward extinction tells us about the prospects for the emperor penguin throughout its range. “This analysis focuses on a single population—that at Terre Adelie—because of the excellent data available for it. But patterns of climate change and sea ice in the Antarctic are an area of intense research interest now. It remains to be seen how these changes will affect the entire species throughout Antarctica,” said Caswell.

Another is the mechanism by which changes in sea ice affect the penguins. “The mechanisms are complex, and are an active area of research,” added Jenouvrier.

Yet another question is whether the penguins might adapt to changing conditions, perhaps by changing the timing of their breeding cycle. However, this does not seem to be happening. “Unlike some other Antarctic bird species that have altered their life cycles, penguins don’t catch on so quickly,” Jenouvrier said. “They are long-lived organisms, so they adapt slowly. This is a problem because the climate is changing very fast.”

The research was a collaboration between the mathematical ecology group at WHOI, led by Caswell, a group of French scientists from Expeditions Polaires Francaises and Institut Paul Emile Victor, and climate scientists from the National Center for Atmospheric Research and the National Snow and Ice Data Center. “The project was truly interdisciplinary,” said Jenouvrier, “which is critical for this kind of research.”

In the more immediate future, the study even might impact legal protections available for the emperor penguin. In December, the U.S. Fish and Wildlife Service issued a preliminary ruling declining to list the emperor penguin under the Endangered Species Act. Caswell said this ruling is still being evaluated and research presented in this paper will have to be considered.

He added that species threatened by climate change are among the most difficult conservation problems. Improving the situation will require global actions to address a truly global environmental problem.