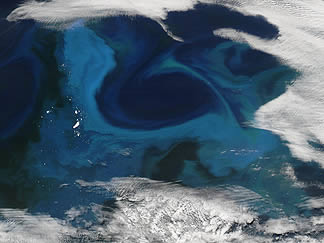 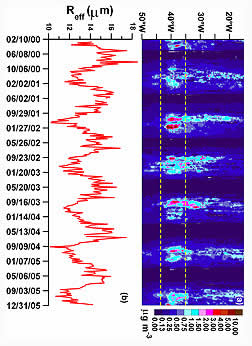 Graphic shows changes in the concentrations of cloud droplets over the Southern Ocean.

ATLANTA, Georgia -- Atmospheric scientists have reported a new and potentially important mechanism by which chemical emissions from ocean phytoplankton may influence the formation of clouds that reflect sunlight away from our planet.

Discovery of the new link between clouds and the biosphere grew out of efforts to explain increased cloud cover observed over an area of the Southern Ocean where a large bloom of phytoplankton was occurring. Based on satellite data, the researchers hypothesized that airborne particles produced by oxidation of the chemical isoprene – which is emitted by the phytoplankton – may have contributed to a doubling of cloud droplet concentrations seen over a large area of ocean off the eastern coast of South America.

Using complex numerical models, they estimated that the resulting increase in cloudiness reduced the absorption of sunlight by an amount comparable to what has been measured in highly polluted areas of the globe. If confirmed by field studies, this connection between clouds and biological activity could add a critical new component to global climate models. Many environmental scientists believe that increased cloud cover may be partially countering the effects of global warming by reducing the amount of energy the planet absorbs from the sun.

Researchers Athanasios Nenes of the Georgia Institute of Technology and Nicholas Meskhidze – formerly at Georgia Tech but now at North Carolina State University – reported their findings Nov. 2 in Science Express, the online advance publication of the journal Science. The research was sponsored by NASA, the National Science Foundation and a Blanchard-Milliken Young Faculty Fellowship.

"Studies like this one may help reshape the way we think about how the biosphere interacts with clouds and climate," said Nenes, an assistant professor in Georgia Tech's School of Earth and Atmospheric Sciences. "One of the largest uncertainties right now in climate models is the ability to predict how clouds would respond to changing particle levels – whether they originate from humans with air pollution or from biological activity. We can now see very strongly the influence of marine biology on oceanic clouds."

Researchers had previously theorized that dimethyl sulfide (DMS) – which is also emitted by phytoplankton – affects the formation of clouds by increasing the number of sulfate particles, which can absorb moisture and form cloud droplets. When oxidized, isoprene may enhance the effect of DMS by increasing the number and size of the particles while helping them to chemically attract more moisture. The impact of isoprene on atmospheric particulate matter was previously thought to be important only for terrestrial plants, Nenes said.

The researchers stumbled upon the phytoplankton-cloud connection quite accidentally. "While looking at the satellite pictures, I noticed that cloud properties over large phytoplankton blooms were significantly different from those that occurred away from the blooms," recalled Meskhidze, now an assistant professor in NC State's College of Physical and Mathematical Sciences.

The Southern Ocean normally has relatively few particles around which cloud droplets can form. The isoprene mechanism could therefore have a significant effect on the development of clouds there – and may account for most of variation in the area's cloud cover.

"If a lot of particles form because of isoprene oxidation, you suddenly have a lot more droplets in clouds, which tends to make them brighter," Nenes explained. "In addition to becoming brighter, the clouds can also have less frequent precipitation, so you might have a build-up of clouds. Overall, this makes the atmosphere cloudier and reflects more sunlight back into space."

In their paper, the researchers estimated that the isoprene emissions reduced energy absorption in the area by about 15 watts per square meter. "This is a huge signal," said Nenes. "You would normally expect to see a change of a couple of watts."

The Southern Ocean is ideal for study because it is largely untouched by pollution and has relatively steady temperature and meteorological conditions during the seasons in which phytoplankton blooms appear. "This seems to be one of those rare regions in the globe where the biology really takes over," Nenes explained. "That allows us to see strongly the impact of biology on the clouds."

As a next step, Nenes would like to examine other areas of the globe for similar activity. "There are a lot of areas that have intense biological activity, so with time we are going to explore more regions to see if this is a widespread phenomenon. Chances are that we will see this in other places," he added.

Nenes and Meskhidze used data from satellite observations to estimate the amount of chlorophyll in the ocean, the emission of isoprene and its connection to cloud formation. Before this new mechanism can be incorporated into global climate models, however, it will have to be confirmed by field experiments.

Atmospheric scientists believe that by blocking sunlight, increased cloudiness has up until now partially mitigated the effects of global warming. The role of oceanic biology on cloud formation could therefore be a major factor in controlling global climate, and the new mechanism identified by Nenes and Meskhidze may make it even more important. This effect needs to be better understood, Nenes noted, because anything that can change global clouds can dramatically alter the impact of greenhouse gases on our changing climate.

"It shows that there is still a lot we need to explore to better understand the delicate balance in nature," said Meskhidze. "It will require the cooperative efforts of researchers from many different fields to identify the chemical components in these aerosols, to estimate the amounts of this and other potentially important gases emitted from the ocean, and to better characterize the effort of organics on cloud droplet formation."