Research: Chemicals From Seaweed Can Kill Coral On Contact; 'This Is A Growing Problem' 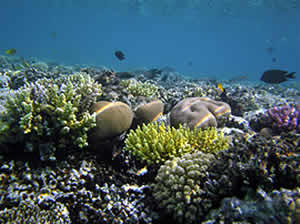 QUEENSLAND, Australia -- Coral reefs are at risk of going soft, quite literally turning to mush as rising carbon dioxide levels prevent coral from forming tough skeletons, according to UQ research.

UQ marine scientists have shown that too much carbon dioxide absorption turns seawater acidic which may prevent corals building their skeletons which make up reefs.

UQ marine science lecturer Selina Ward said natural reefs were not at immediate threat of acidification yet but the findings served as a future warning.

“You've got a balance between erosion and growth and at the moment in a healthy system, growth wins by about 10 percent.

“If we go up to double pre-industrial levels of CO2 which is a conservative guess by 2050, then that balance may tip and we'll start to have our reefs dissolving instead of growing.”

“I am interested in whether the larvae can lay down that first skeleton when they first settle,” she said.

“That's the beginning of the new coral, so if it can't lay down a skeleton it sits there like a little jellyfish and is very vulnerable and can't grow to build a reef.”

The research results can also be plugged into climate models to predict future reef health.

“Rio Tinto Aluminium produces CO2 emissions by the very nature of the industry and they're aware of their role and this is part of many strategies the company is using to combat their negative role.”

“They have given us $1 million to work on climate change and coral reefs.”