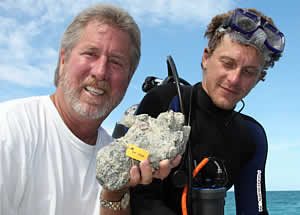 Returning to port from sea late Friday night, Captain Dan Porter, Operations Manager for BWV, said that it won't be known exactly how many of the hundreds-of-years-old coinsâor other types of treasureâare in the calcareous concretion until the mass has undergone conservation.

Discovered in the Florida Straits on the site of the shipwrecked galleon Santa Margarita, Wednesday's conglomeration discovery was followed on Friday by the discovery of an ornate silver artifact that may be a handle or base to a larger piece, as well as an early muzzle-loaded firearm called an arquebus, and two more loose silver coins, Porter said.

Since 2006, the Blue Water Ventures team has been pursuing the missing portions of the Santa Margarita, which was destroyed in the hurricane of 1622. In 1980, Blue Water's joint-venture partner, Mel Fishers Treasures, discovered a 23 foot long section of the ship's wooden hull with treasures valued at approximately $40 million, but the missing portions of the 600 ton ship remained elusive, largely because the widely scattered nature of the wreck and the deep, rapidly shifting and treacherous sands that conceal her remains present unique challenges that technology has only recently advanced to meet.

Archival records reveal that in 1622, the Santa Margarita was swept across the reef off of Key West, grounding into a sand bar. Here she was dashed to bits, creating a debris field that has been compared to that of a piÃ±ata beaten by sugar-crazed children. Since extending previously explored wreckage trails, and identifying and tracking newly discovered ones, the Blue Water Ventures team has discovered multi-millions in treasures. Treasure coins like the ones just found were once the most coveted and widely traded money on earth; the economy of the world depended on an uninterrupted flow of these hand-hewn, individually struck coins pouring from New World mints, across the sea to Europe and beyond. Today, they are collected by enthusiasts all over the world and particularly rare types can be worth up to tens of thousands of dollars each.

The ultimate prize? Says BWV CEO Webb, "not including the inevitable smuggled contrabandâsome 169 silver bars weighing as much as 100 pounds each, close to 3000 ounces of gold in the form of bars, discs and bits, and up to 80,000 more silver treasure coins. We are searching for the point of the Margarita's first impact. Along the way, we are discovering treasure, and we are discovering history."

To learn more about Blue Water Ventures Key West and the search for the Santa Margarita shipwreck, visit www.bwvkw.com