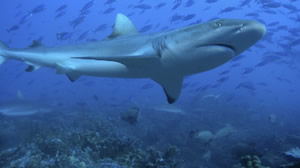 Scientists with the Khaled bin Sultan Living Oceans Foundation (KSLOF) dove into the shark-infested waters of French Polynesia to study how sharks hunt for prey in the wild–using a professional film crew. The cameramen were shooting footage for Mysteries of the Coral Canyon an award-winning documentary airing this month on PBS. The research, published in Coral Reefs, is the first to document natural predatory behavior of grey reef sharks.

The team was on the Foundation's Global Reef Expedition to film marbled grouper spawning. Once a year, as many as 10,000 of these fish gather in a narrow channel to mate - attracting hundreds of sharks that hunt the grouper while they are distracted and exposed.

Using the footage taken during the spawning and at the reef 3 weeks later, shark scientist Dr. William Robbins was able to record which fish the sharks targeted and how often they actually caught one.

"Grey reef sharks are an adaptable predators," said Dr. Robbins of Wildlife Marine and lead author of the study, "This research shows sharks modify their hunting strategy based on the type of fish they are targeting–slow and steady for agile fish like fusilier, fast and furious for large fish like grouper."

Grey reef sharks preyed almost exclusively on the most abundant fish no matter the fish's position on the food chain. This upends traditional theories of shark feeding behavior by showing that sharks don't just eat large predatory fish. The sharks were surprisingly unsuccessful when hunting, capturing only 5-8% of the fish they targeted, and still had to fend off their catch from other sharks, often ripping large grouper to pieces in the process.

"To protect coral reefs, we need to understand the role sharks play in the ecosystem," said Captain Philip Renaud, Executive Director of KSLOF. "This research suggests sharks may be able to regulate the balance of reef fish by hunting over-abundant species."