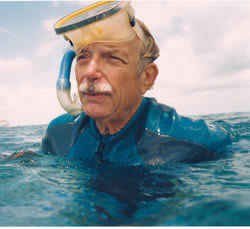 MIAMI, Florida -- What began as an homage to achievement in the field of coral reef geology has evolved into the discovery of an unexpected link between corals of the Pacific and Atlantic. Dr. Ann F. Budd from the University of Iowa and Dr. Donald McNeill of the University of Miami named a new species of fossil coral found on the Island of Curaao — some six million years old — after renowned coral reef geologist and University of Miami Rosenstiel School professor, Dr. Robert N. Ginsburg. The new species, originally thought to be an elkhorn coral (genus Acropora), a species widely distributed throughout the Caribbean, was informally christened Acropora ginsburgi in 1995 on Ginsburg’s 70th birthday.

Still having great difficulty distinguishing fossil acroporid species, when formally describing the new species, Budd elicited the help of Dr. Carden C. Wallace of the Museum of Tropical Queensland, Australia, who recognized why a positive identification had been so challenging -- the genus was not Acropora after all, but a Pacific acroporid genus named Isopora.

Detailed in an upcoming issue of the journal Palaeontology, scientists sampled 67 localities around Curaao, Netherlands Antilles and discovered two new species -- Isopora ginsburgi and Isopora curacaoensis. The coral genus Isopora, a sister group of the modern dominant Acropora, until now was only known from the Pliocene to Recent of the Indo-Pacific. Study of large collections made systematically throughout the area indicates that Isopora first occurred in the Caribbean during the Mio—Pliocene, at approximately the same time as the origination of many modern Caribbean reef coral dominants including Acropora cervicornis, the well known “staghorn coral.” The occurrences of Isopora reported in this study are the oldest records of Isopora worldwide, and are important for understanding the biogeographic separation between reef coral faunas in the Caribbean and Indo-Pacific regions.

“We now know that Isopora last occurred in the region during the late Pliocene, a million years ago as part of a pulse of extinction, in which several genera that live today in the Indo-Pacific became extinct in the Caribbean,” said Budd, “This research has further illuminated that these corals co-occurred with the two abundant modern Caribbean species of elkhorn and staghorn corals Acropora (A. cervicornis and A. palmate), often living side-by-side with the two newly-evolved common Caribbean reef corals."

“It is certainly an honor to have a fossil of Pacific coral from the Caribbean named after me,” said Ginsburg. “This discovery marks a milestone in my career, and serves as a special tribute to the decades of research I have done on these amazing animals which are so critical to our coral reefs.”