Researchers: Pumping Oxygenated Water Down To A Depth Of 120 Meters Can Save The Baltic Sea

Researchers: Fish Getting Smaller As The Oceans Get 'Warmer And Less-Oxygenated Ocean' 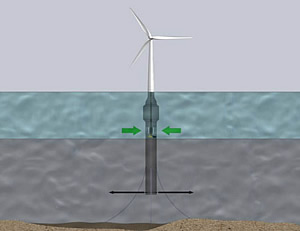 GOTHENBURG, Sweden -- Scientists have shown that oxygenation can bring dead sea bottoms to life. This creates the necessary conditions for the establishment of new ecosystems that enable nature itself to deal with eutrophication. By conducting pilot studies in two fjords in Sweden, researchers at the University of Gothenburg have demonstrated that pumping oxygen-rich surface water down to sea bottoms is effective. A large wind-driven pump is now to be tested in open water in the Baltic.

"Today everyone is focused on reducing nutrient inputs to the sea in order to reduce eutrophication in the Baltic, but by helping nature itself to deal with the phosphorus that is discharged we can create a turbo effect in the battle against eutrophication," says Anders Stigebrandt, Professor Emeritus at the Department of Earth Sciences, University of Gothenburg.

The idea of oxygenating dead sea bottoms comes from nature itself. The method of oxygenating the deep water in the Baltic can be compared to creating wetlands on land. Both methods are based on creating the conditions required for ecosystem services by establishing new ecosystems that can effectively bind the nutrients.

"If oxygen-free bottoms in the Baltic are oxygenated, it can be anticipated that every square kilometer of bottom surface will be able to bind 3 tonnes of phosphorus in a short time, which is a purely geochemical effect. If the bottoms are then kept oxygenated for a prolonged period, fauna becomes established on and in the bottoms. This leads to the bottom sediments being oxygenated down to a depth of several centimeters, and the new ecosystem probably contributes to the possibility of further phosphorus being bound to the sediment."

The research project Baltic Deepwater Oxygenation, directed by Stigebrandt, is testing the hypothesis that prolonged oxygenation of the Baltic deep water results in long-term and increasing binding of phosphorus in bottom sediment. An important question to be answered is how the oxygenated deep-water areas can bind phosphorus in the longer term. The answers are being sought through pilot studies in Byfjorden on the west coast and KanholmsfjÃ¤rden on the east coast, as well as in laboratory experiments. The project includes examining how the oxygenated bottoms are colonized and how this affects phosphorus uptake.

Stigebrandt is now planning a trial involving large-scale wind-driven pumping in the open water of the Baltic, in cooperation with Inocean AB, which is designing the pump on the basis of established technology from the off-shore industry. The pump is contained in a 60 meters high and 100 meters deep tubular buoy which is anchored in an open location, in a deep basin yet to be decided off the east coast of Sweden. As a result of the buoy being given a small cross-sectional area at the water surface, the pump becomes non-sensitive to wave motions.

"The pump is to have capacity to pump 30 cubic meters of water per second, which is 15 times more than the pump in the Byfjord experiment. If this works, using a five times larger pump in a buoy around 120 meters deep should not pose major problems. This is the size we anticipate pumps needing to have in a future large-scale system for oxygenation of the Baltic deep water," says Stigebrandt.