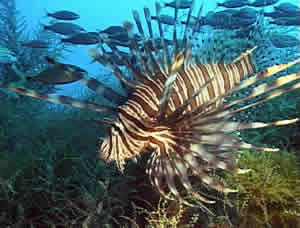 WASHINGTON, D.C. -- A new study looking at how to curb the rapid growth of lionfish, an invasive species not native to the Atlantic Ocean, suggests that approximately 27 percent of mature lionfish will have to be removed monthly for one year to reduce its population growth rate to zero.

But the good news is that the invasive fish happens to be deliciousâand NOAA is encouraging chefs to find new ways to introduce it to U.S. consumers.

Lionfish are native to the western and central Pacific Ocean, but have established themselves from North Carolina to South America. They are a popular aquarium fish that were likely first released in Florida waters in the mid-1980s. Since then, the species has spread rapidly. Scientists and public officials are seriously concerned at the effect lionfish are having on reef ecosystems, since this predator is capable of rapid population growth and outcompeting native fish for food and territory.

"This study offers us the first target for fishing and other local control efforts such as lionfish derbies," says Lad Akins, director of operations for the Reef Environmental and Education Foundation, an organization of divers and marine enthusiasts who are working to combat the lionfish problem.

The effort to fish down the species has already begun. Caribbean nations such as the Turks and Caicos Islands are encouraging widespread fishing for lionfish by instituting year-long tournaments with cash prizes for the most lionfish caught.

Authorities are also encouraging a local market for the species, whose delicate white flesh tastes similar to a snapper or grouper. NOAA scientists concur that developing a market for lionfish is one of the only ways to substantially reduce their numbers. To this end, NOAA has developed an "Eat Lionfish" campaign that brings together fishing communities, wholesalers, and chefs in an effort to broaden U.S. consumers' awareness of this delicious invader.

While the study represents a significant step forward in understanding how to turn the tide of the invasion, the study's authors warn that more work is needed to understand the ecological effects of lionfish, track the population, and develop control strategies.

"Lionfish represent the first reef fish invader to become established in the Atlantic, but as we know from history, invasive species are a persistent problem," says Dr. James Morris, a marine ecologist with NOAA's Center for Coastal Fisheries and Habitat Research. "Understanding the factors involved in the spread of lionfish may help us be better prepared for future invasions."

The study, a collaboration between scientists from NOAA and North Carolina State University, can be found in the June 2010 issue of Biological Invasions.

NOAA's mission is to understand and predict changes in the Earth's environment, from the depths of the ocean to the surface of the sun, and to conserve and manage our coastal and marine resources. Visit us on Facebook.