Kiwi Angler Pulls in New Zealand's First Bull Shark; 'This is Going to be a Good Story' 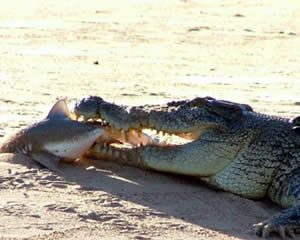 Only one winner here ... a large saltwater crocodile latches on to a small bull shark on the banks of the Daly River. credit: Indrek Urvet

DARWIN, Australia -- An extraordinary encounter between two of nature’s most fearsome man-eaters has been photographed by an amateur fisherman.

Indrek Urvet said that he watched in astonishment as a four-metre (13ft) saltwater crocodile made swift work of a much-smaller bull shark by the remote Daly River in the Northern Territory. “I just saw this big croc come charging out of the water with a shark flapping in its jaws. I turned my boat to take some photos. Suddenly the croc saw me. He turned around and came shooting towards me.”

Mr Urvet, who said that fishermen on the river frequently lost their catch to the bull sharks before they could reel it in, retreated and watched from a safer distance as the crocodile devoured the metre-long shark.

Bull sharks, which grow to 3.5m, are known to be highly aggressive and, unlike other marine sharks, can dwell for extended periods in both fresh and saltwater.