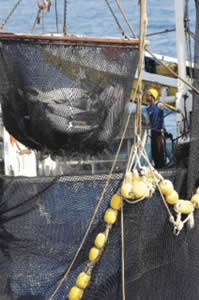 At the time of seizure, the ship Tiuna had about 12 tons of fish that was caught in the waters of Cocos Island. credit: Marvin Caravaca

SAN JOSE, Costa Rica -- On January 29th, local Costa Rican fishermen blew the whistle against a purse seine vessel that was illegally fishing inside the marine area of Cocos Island National Park, Costa Rica, by reporting the incident to officers of the Ministry of Environment (MINAE) and the local coastguard.

The Panama Flagged ship "Tiuna", was caught 9.5 miles away of the island, which is supposed to enjoy a 12 mile no take zone, at the time of its capture. Officers reported the release of 12 tons of live tuna from the purse seine nets, and confiscated the 280 tons of tuna in its hold.

The illegal operation of purse seine tuna vessels inside Marine Protected Areas (MPAs) of the Eastern Tropical Pacific is not an isolated incident, as there have been similar recent reports in Galapagos (Ecuador) and Malpelo (Colombia). The problem is that local authorities lack resources to efficiently patrol their waters, a situation which tuna purse seiners take advantage of to poach officially protected marine resources..

Not lost on the fishing industry, tuna illegally caught in MPAs still qualifies for a "Dolphin Safe" certification, because the duty of Inter-American Tropical Tuna Commission (IATTC) observers is only to report the dolphin kill, not other illegal activities.

"If we canÂ´t trust IATTC observers to report pirate activities in MPAs, in spite of their UN Humanity Heritage status, can we trust them to report true dolphin kill figures?", wondered Randall Arauz from PRETOMA.

"The most recent information regarding dolphin populations in the Eastern Tropical Pacific tells us we can`t, because of which consumers of canned tuna should think twice before they purchase tuna with environmental protection labels".