Scientists Find Possible Solution To An Ancient Enigma: What Happened To The Stromatolites? 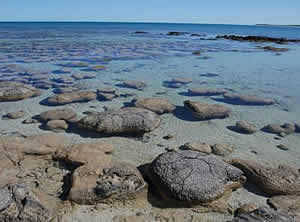 WOODS HOLE, Massachusetts -- The widespread disappearance of stromatolites, the earliest visible manifestation of life on Earth, may have been driven by single-celled organisms called foraminifera.

The findings, by scientists at Woods Hole Oceanographic Institution (WHOI); Massachusetts Institute of Technology; the University of Connecticut; Harvard Medical School; and Beth Israel Deaconess Medical Center, Boston, were published online the week of May 27 in the Proceedings of the National Academy of Sciences.

Stromatolites ("layered rocks") are structures made of calcium carbonate and shaped by the actions of photosynthetic cyanobacteria and other microbes that trapped and bound grains of coastal sediment into fine layers. They showed up in great abundance along shorelines all over the world about 3.5 billion years ago.

"Stromatolites were one of the earliest examples of the intimate connection between biologyâliving thingsâand geologyâthe structure of the Earth itself," said WHOI geobiologist Joan Bernhard, lead author of the study.

The growing bacterial community secreted sticky compounds that bound the sediment grains around themselves, creating a mineral "microfabric" that accumulated to become massive formations. Stromatolites dominated the scene for more than two billion years, until late in the Proterozoic Eon.

"Then, around 1 billion years ago, their diversity and their fossil abundance begin to take a nosedive," said Bernhard. All over the globe, over a period of millions of years, the layered formations that had been so abundant and diverse began to disappear. To paleontologists, their loss was almost as dramatic as the extinction of the dinosaurs millions of years later, although not as complete: Living stromatolites can still be found today, in limited and widely scattered locales, as if a few velociraptors still roamed in remote valleys.

While the extinction of the dinosaurs has largely been explained by the impact of a large meteorite, the crash of the stromatolites remains unsolved. "It's one of the major questions in Earth history," said WHOI microbial ecologist Virginia Edgcomb, a co-author on the paper.

It's not known whether stromatolites became thrombolites, or whether thrombolites arose independently of the decline in strombolites. Hypotheses proposed to explain both include changes in ocean chemistry and the appearance of multicellular life forms that might have preyed on the microbes responsible for their structure.

Bernhard and Edgcomb thought foraminifera might have played a role. Foraminifera (or "forams," for short) are protists, the kingdom that includes amoeba, ciliates, and other groups formerly referred to as "protozoa." They are abundant in modern-day oceanic sediments, where they use numerous slender projections called pseudopods to engulf prey, to move, and to continually explore their immediate environment. Despite their known ability to disturb modern sediments, their possible role in the loss of stromatolites and appearance of thrombolites had never been considered.

The researchers examined modern stromatolites and thrombolites from Highborne Cay in the Bahamas for the presence of foraminifera. Using microscopic and rRNA sequencing techniques, they found forams in both kinds of structures. Thrombolites were home to a greater diversity of foraminifera and were especially rich in forams that secrete an organic sheath around themselves. These "thecate" foraminifera were probably the first kinds of forams to evolve, not long (in geologic terms) before stromatolites began to decline.

"The timing of their appearance corresponds with the decline of layered stromatolites and the appearance of thrombolites in the fossil record," said Edgcomb. "That lends support to the idea that it could have been forams that drove their evolution."

Next, Bernhard, Edgcomb, and postdoctoral investigator Anna McIntyre-Wressnig created an experimental scenario that mimicked what might have happened a billion years ago.

"No one will ever be able to re-create the Proterozoic exactly, because life has evolved since then, but you do the best you can," Edgcomb said.

They started with chunks of modern-day stromatolites collected at Highborne Cay, and seeded them with foraminifera found in modern-day thrombolites. Then they waited to see what effect, if any, the added forams had on the stromatolites.

That result was intriguing, but it did not prove that the changes in the structure were due to the activities of the foraminifera. Just being brought into the lab might have caused the changes. But the researchers included a control in their experiment: They seeded foraminifera onto freshly-collected stromatolites as before, but also treated them with colchicine, a drug that prevented them from sending out pseudopods. "They're held hostage," said Bernhard. "They're in there, but they can't eat, they can't move."

After about six months, the foraminifera were still present and aliveâbut the rock's structure had not become more clotted like a thrombolite. It was still layered.

The researchers concluded that active foraminifera can reshape the fabric of stromatolites and could have instigated the loss of those formations and the appearance of thrombolites.