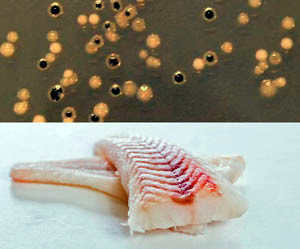 REYKJAVIK, Iceland -- Rapid and accurate detection of the bacteria that make fish go off is now possible, according to scientists in Iceland.

EyjÃ³lfur Reynisson from MatÃ­s-Icelandic Food Research, Reykjavik, and colleagues, have developed a method that uses the polymerase chain reaction (PCR) to amplify, detect and quantify DNA sequences from Pseudomonas bacteria in fish.

Pseudomonas bacteria play an important role in seafood spoilage. They live on the surface, gills and in the gut of living fish. Soon after a fish dies, the bacteria invade the flesh and start to break it down. The bacteria grow and multiply, producing compounds responsible for the unpleasant fishy smell often associated with old seafood.

'Real-time PCR detection technologies are fairly new in the scientific world in comparison to conventional cultivation methods,' says Reynisson. He explains that the new assay is much quicker than conventional detection methods and Paw Dalgaard, who studies microbial seafood spoilage at DTU Aqua, Kongens Lyngby, Denmark, agrees. 'The new real-time PCR method allows quantification of spoilage Pseudomonas in fish within about five hours compared to approximately 20 hours for the conductance assay, which was previously the fastest method,' says Dalgaard.

This short detection time will provide the fish industry with an important tool for monitoring contamination by spoilage bacteria and for quality control, claims Reynisson. 'Using this technique in combination with predictive microbiological models might provide a tool for predicting the remaining shelf life of the product in the future,' he added.