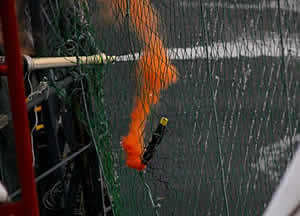 A smoke bomb thrown by the Bob Barker activists got entangled in the Yushin Maru No. 2 port-side protective net. credit ICR 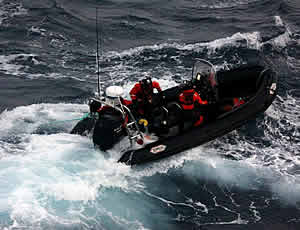 Bob Barker activists onboard a zodiac deploy a rope to entangle the Yushin Maru No. 2 rudder and propeller. credit ICR

TOKYO, Japan -- The crew of a Japanese whaling vessel claim activists from the Sea Shepherd environmental group threw smoke bombs and grappling irons at their harpoon ship in the Antarctic Ocean on Sunday, thus endangering the vessel and its personnel.

The Yushin Maru No. 2 (YS2), a Japanese Antarctic whale research vessel was subjected to attack today by the Netherlands-registered vessel Bob Barker (BB). The attack started at about 1800JST and lasted until about 1840JST

At about 1800JST two zodiac boats sent from the Bob Barker rapidly approached the Japanese vessel and the activists started hand-throwing at least two flash bangs and one smoke bomb toward the YS2. One of the flash bangs landed in the bow and the other two projectiles got entangled on the port-side protecting net of the Japanese vessel.

Also, the activists put a hook and rope on the port-side handrail (where the protecting net is fixed) of the YS2. In addition, the zodiac activists deployed and dragged ropes aiming to entangle the propeller and rudder of the YS2.

At about 1840JST one of the ropes being dragged by one of the zodiac boats entangled its own propeller and the zodiac became unnavigable. Seeing this, the other zodiac activists ceased their attack on the Japanese vessel.

During the attack the Yushin Maru No. 2 broadcasted a warning message and made use of its water jet-pump as a preventive measure to make the activists desist from further approaching. The hook and rope attached by the activists to the YS2 handrail detached itself falling to the sea.

The flash bang and the smoke bomb that got entangled to the port-side protecting net were burning for a while but fortunately the fire did not spread to the net itself. Neither injuries to the Japanese crew nor damage to the YS2 resulted from the activists' attack.

Japan's research whaling in the Antarctic (JARPAII) is a perfectly legal activity carried out under the International Convention for the Regulation of Whaling (ICRW). The Institute of Cetacean Research strongly condemns the Sea Shepherd Conservation Society and its continued dangerous and violent actions against Japan's whale research vessels in the Antarctic. We call on all related countries including the Netherlands which is the Bob Barker flag state and Australia, the virtual home port of the SS vessels, to stop condoning the Sea Shepherd Conservation Society violent actions and to take every means available to restrain them. Further, we strongly request that these countries deal with the SSCS criminal actions in a strict and objective manner according to their international obligations.