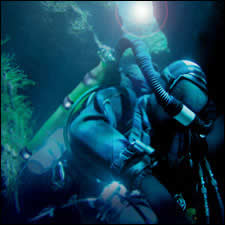 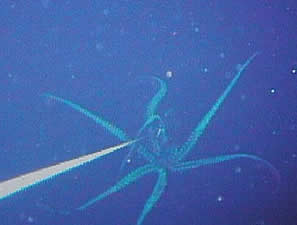 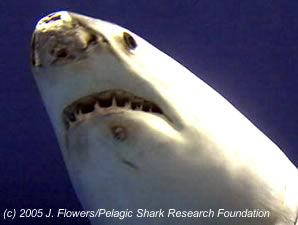 Close-up of the MBA's great white shark on display 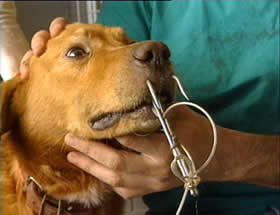 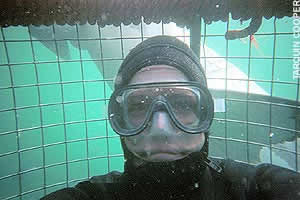 MIAMI, Florida -- UnderwaterTimes.com published links to over 3,000 stories in 2005, marking another year as the worldâs leading portal for underwater news.

After re-reading those 3,000 stories, one quickly realizes that 2005 was an amazing year for the underwater world. We saw technology opening up the oceans to our eyes like never beforeâwhile the potent threats of pollution, climate change, and overfishing are just now being recognized. Itâs a classic struggle, exploration versus exploitation and destruction, now unfolding underneath the surface our lakes, streams, and oceans. Those themes, exploration, exploitation, and destruction, run through all of the top stories from 2005.

1) Giant Squid Photographed for the First TimeâFor the longest time, the giant squid was a creature of lore, lurking in the inky depths, known only by the dead specimens recovered from fishermenâs nets or washed ashore. That all changed in September 2005, when a team of Japanese researchers released pictures and video of a live giant squid they located 2,950 feet beneath the Pacific Ocean. http://news.nationalgeographic.com

2) Monterey Bay Aquarium Releases Great White Shark â The great white shark displayed by the Monterey Bay Aquarium starting in September 2004 swelled attendance and captured the public's attention. On March 7, UnderwaterTimes.com published a series of exclusive photos detailing the sharkâs severely abraded nose, likely caused by its constant bumping into the side of tank. On March 31st, after a record-setting 198 days in captivity, the shark was released because it was âgetting too bigâ. http://www.sfgate.com

3) David Shaw Dies During Daring Cave DiveâAn extraordinary promise to raise Deon Dreyerâs body from the bottom of the worldâs largest underwater cave cost Australian David Shaw his life in January. Incredibly, Shaw captured his own death on video tape during the 800-foot-deep dive, documenting his struggle to recover the Deonâs body, and his final moments of life before he succumbed from a build up of carbon dioxide in his lungs. In a final twist, David and Deonâs bodies floated up from the depths and were found near the surface when a recovery effort was later launched.
http://outside.away.com

4) Live Dog Used as Shark BaitâUndoubtedly, the most gut-wrenching images from 2005 appeared in October. Photos taken on the French island of RÃ©union depicted a labrador with a large hook and fishing line embedded in its snout. The dog, a stray, was being used as bait by a fisherman hoping to catch a shark. The photos, published in the British press, caused a minor sensation and demands for an end to the cruel practice. http://www.thesun.co.uk

5) Shadow Divers Has LegsâThe 2004 book based on the exploits of two divers who risked everything to solve the mystery of a sunken U-boat has propelled scuba diving into the mainstream. The bookâs two stars, John Chatterton and Richie Kohler are co-hosts of the TV show Deep Sea Detectives. A movie based on the book is due to be released in 2007. Keep watching these two for more projects to come. http://www.bookreporter.com

6) Tsunami AftermathâNot long after the 2004 day-after-Christmas tragedy, the videos of the tsunami slowly started spreading over the internet. And in almost an instant, a new type of blogger was born, the vlogger, or video logger. The vloggers burned through gigabyte after gigabyte of bandwidth while they shared with the world the harrowing videos of the tsunamiâs awesome power. http://news.bbc.co.uk

7) Russian Mini-Sub Stranded UnderwaterâIn August, a frantic rescue mission was launched when a Russian mini-submarine with a seven-man crew became ensnared 625 feet below the oceanâs surface. With only a limited amount of oxygen available and no other submarine available to help, the Russians appealed to the world for assistance. The three-day ordeal was ended when the British flew in a rescue submarine that freed the trapped sub and crew. http://www.cnn.com

8) Shark Diving Goes Mainstream, Creates BacklashâWhen 60 Minutes recently ran a profile on the controversy of shark diving, it was clear that the new adrenaline-fueled craze of scuba diving with man-eating sharks hit the mainstream. However, the new popularity of shark diving has also stirred up a backlash from surfers, beach-goers, shark attack victims and conservationists, saying the practice of chumming with blood is leading to sharks associating humans with food. http://www.cbsnews.com

9) Commercial Whaling ResumesâLed by Norway and Japan, the worldâs commercial whaling fleets are back cruising the seas in search of whales and controversy is following along. When Japanâs thinly-veiled âresearchâ whaling fleet sailed in November, Australians were outraged and labeled the program as an âinsult to scienceâ. http://www.planetark.com

10) Deep-Sea Bottom Trawling Gets a Bad NameâThe practice of dragging massive nets across the ocean floor to scoop up fish has come under heavy pressure as conservation groups have characterized it as "fishing with a bulldozer." All around the world, there have been calls for a moratorium on bottom trawling and protections for deep-sea corals. http://news.bbc.co.uk