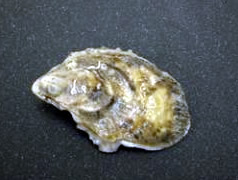 The Eastern Oyster population has been decimated by overfishing, rising water temperatures and pollution. photo:Inna Sokolova

BETHESDA, Maryland -- Oysters exposed to high water temperatures and a common heavy metal are unable to obtain sufficient oxygen and convert it to cellular energy, according to a new study presented at The American Physiological Society conference, Comparative Physiology 2006.

The study "Temperature tolerance in the oyster, Crassostrea virginica, is affected by cadmium," was carried out by Lannig, of the Alfred Wegener Institute for Polar & Marine Research, Bremerhaven, Germany, and Jason Flores and Inna Sokolova, of the University of North Carolina at Charlotte. The work was done in North Carolina. The researchers presented the study October 10 during a poster session at Comparative Biology 2006: Integrating Diversity in Virginia Beach.

Oysters once thrived in the coastal regions of much of the eastern United States, but over-fishing, global warming, rising ocean water temperatures and increased pollution have combined to reduce the oyster population to 5% of what it was 200 years ago, Sokolova said. The loss of oysters has far-reaching environmental implications.

"We can't even imagine the expanse of oyster reefs 100-200 years ago and their impact on the ecosystem," Sokolova said. For example, a century ago, the oyster population could completely filter the water in the Chesapeake Bay in three days. Today, with the oyster population continuing to decline from poor water quality and disease, it would take a year to filter the same amount of water, she said. In addition to filtering water, oysters create a kind of reef that other marine life depends upon.

"Studies have shown that there are more than 300 species reliant on oyster reefs, including at least 12 species important for their commercial or recreational value, such as blue crabs, sheepshead, croaker and stone crab," Sokolova said. "Some of these species, such as blue crabs, use oyster beds and reefs as nursery areas and as feeding grounds." The oyster beds are also important to a variety of marine life that serves as food for larger fish. It was within this context that the North Carolina team did their study.

The researchers divided oysters into three groups. One group was acclimated to water that was 20Â° C (68Â°F), one to 24Â°C (75Â°F) and a final group to 28Â°C (82Â°F). All three temperatures are within the range that oysters are exposed to in their natural environment, Lannig said. In fact, this summer, which was unusually hot, water temperatures reached 32Â°C, she said. Each temperature group was subdivided into two subgroups, oysters that were exposed to cadmium and those that were not.

However, there was no difference in oxygen consumption between the two groups acclimated to 28Â°C. The researchers concluded that the cadmium-exposed oysters in this group needed more oxygen than the unexposed group, but were either unable to obtain enough oxygen, convert the oxygen they obtained to energy, or both. The researchers drew this conclusion, Lannig said, based on measurements of respiratory activity, the animal's blood oxygen content and mitochondrial function.

The 28Â°C cadmium-exposed group spent more time in respiratory activity, trying to take in oxygen. Their shells were open significantly longer than any of the other groups, a measure of the amount of time they spend "breathing." (When oysters open their shells, they are taking in oxygen. Oxygen flow stops when they close the shell.)

The researchers also examined the effect of cadmium and temperature on the mitochondria of the oyster's cells. The mitochondria are the cell's power plant, producing energy for the oyster, including for ventilation and circulation.

"We found that mitochondria are very sensitive to cadmium at high temperatures," Lannig noted, suggesting that the higher temperature and cadmium exposure negatively affect the mitochondria's ability to produce energy.

In a second experiment, the researchers acclimated two groups of oysters to 20Â°C water. One group was exposed to cadmium. Both groups were then subjected to an acute temperature increase of 4Â°C overnight (to 24Â°C).

"Here we saw that the cadmium-exposed oysters showed a decrease in blood oxygen content with the higher temperature, but not the control group that was not exposed to cadmium," Lannig said. Once again, this shows that the combination of temperature and pollution combine to intensify the stress placed on the oyster's physiological system.

In future experiments, the researchers will try to determine whether the combination of temperature and pollution is preventing oysters from obtaining enough oxygen or whether it is interfering with the animal's ability to use the oxygen it obtains, Lannig said. These experiments on oyster physiology could be important to save what is left of this ecologically important population.