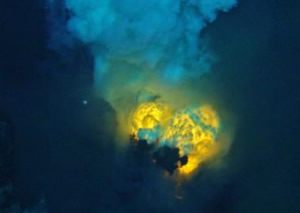 A double magma bubble, about 1 Â½ feet across at its base, emerges from the"Hades" vent at the West Mata submarine volcano. credit NSA/NOAA 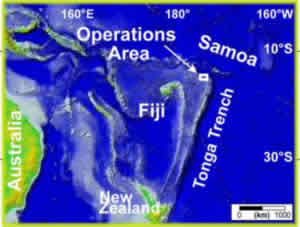 The operations area at West Mata volcano during the 2009 expedition is part of the Lau Basin, bounded by Samoa, Tonga and Fiji. credit: NSF/NOAA

SEATTLE, Washington -- The first scientists to witness exploding rock and molten lava from a deep sea volcano, seen during a 2009 expedition, report that the eruption was near a tear in the Earth's crust that is mimicking the birth of a subduction zone.

Scientists on the expedition collected boninite, a rare, chemically distinct lava that accompanies the formation of Earth's subduction zones.

Nobody has ever collected fresh boninite and scientists never had the opportunity to monitor its eruption before, said Joseph Resing, University of Washington oceanographer and lead author of an online article on the findings in Nature Geoscience. Earth's current subduction zones are continually evolving but most formed 5 million to 200 million years ago. Scientists have only been able to study boninite collected from long-dead, relic volcanos millions of years old.

Resing was chief scientist on the expedition, funded by the National Oceanic and Atmospheric Administration and the National Science Foundation, that pinpointed the location of the West Mata volcano, erupting 4,000 feet (1,200 meters) below the surface in the Southwest Pacific Ocean. Watch clip of eruption on YouTube at http://www.youtube.com/watch?v=qaKnWF5ORsU.

"Everything about the eruption itself â how fast, how intense, the ratio of lava to explosive fragments, the amount and composition of gas released â is new to us," said co-author Kenneth Rubin, University of Hawaii geologist. "Plus, having a young, fresh occurrence of this very rare rock type to study gives us the opportunity to examine subtle chemical and mineralogical variations in a pristine specimen."

At subduction zones the oceanic crust on one tectonic plate slides beneath another, producing abundant volcanism and contributing heat, gases and mineral-laden fluids to ocean waters. Scientists have long studied the impact of subduction zones on geological and geochemical cycles. To puzzle out how subduction zones form and evolve they study inactive contemporary marine volcanos that do not produce boninite and they collect and study boninite lavas collected on land and examine cores collected from the deep sea.

"West Mata lies above the subducting Pacific plate and is part of the rapidly expanding Lau Basin, which is bounded by Samoa, Tonga and Fiji," Resing said. "The large bend at the northern end of the Tonga trench produces a tear in the Pacific plate and creates unusual lavas that usually only form at very young subduction zones."

Conditions are right for boninite to form, there's lots of seawater released from subducting rock that mixes into relatively shallow mantle that has previously melted, causing the mantle to remelt at high temperatures. Boninite lavas are believed to be among the hottest from volcanos that erupt on Earth.

"What makes this exciting is how uncommon these eruptions of boninite are, both now and in the past," Rubin said. "Locked within the boninite is critical information about the rates and magnitudes of subduction-zone magmatism and global geochemical cycles."

The scientists writing in Nature Geoscience think the release of gaseous water, carbon dioxide and sulfur dioxide from the slab is the reason the eruption was so explosive. No one realized such energetic eruptions happened so deep, Resing says. Streams of red and gold lava 35 feet long shot through the water and lava-skinned bubbles some three feet across emerged.

West Mata, which the scientists estimate has been erupting for at least three years, and eight other elongated volcanoes that overlap each other in the northeast Lau Basin sit within one of the most magmatically active areas on Earth, Resing says.

"The basin may prove an important place to study submarine volcanic eruptions in relation to early stages of subduction," he said.

Rubin and Robert Embley, with NOAA's Pacific Marine Environmental Laboratory, Newport, Ore., and co-author on the paper, will return to the area in November for further study and to try to determine if the volcano is still actively erupting.

"Observing the eruption in real time was a rare and special opportunity because we know so little about how submarine volcanic activity behaves," Embley said. "This is one of only a handful of 'glimpses' of the process we've had to date and is the first time we've actually observed natural submarine light from the glowing magma."