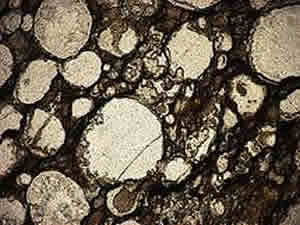 OXFORD, United Kingdom -- Floating rafts of volcanic pumice could have played a significant role in the origins of life on Earth, scientists from Oxford University and the University of Western Australia have suggested.

The researchers, writing in the September issue of the journal Astrobiology, argue that pumice has a unique set of properties which would have made it an ideal habitat for the earliest organisms that emerged on Earth over 3.5 billion years ago.

'Not only does pumice float as rafts but it has the highest surface-area-to-volume ratio of any type of rock, is exposed to a variety of conditions, and has the remarkable ability to adsorb metals, organics and phosphates as well as hosting organic catalysts, such as zeolites,' said Professor Martin Brasier of Oxford University's Department of Earth Sciences who led the work with David Wacey of the University of Western Australia. 'Taken together these properties suggest that it could have made an ideal 'floating laboratory' for the development of the earliest micro-organisms.'

The researchers believe that pumice's unique lifecycle â in which it erupts from a volcano, then floats in rafts along the water's surface before entering the tidal zone, and then beaching for long periods close to shore â would have presented many opportunities for life to develop.

'During its lifecycle pumice is potentially exposed to, among other things, lightning associated with volcanic eruptions, oily hydrocarbons and metals produced by hydrothermal vents, and ultraviolet light from the Sun as it floats on water,' said Professor Brasier. 'All these conditions have the potential to host, or even generate, the kind of chemical processes that we think created the first living cells.'

'We know that life was thriving between the pores of beach sand grains some 3,400 million years ago,' said David Wacey of the University of Western Australia, referring to the team's recent work in Nature Geoscience. 'What we are saying here is that certain kinds of beach might have provided a cradle for life.'

The team say that their hypothesis can be tested by examining the early fossil record for evidence of pumice rafts, and conducting laboratory experiments on pumice rocks to see if they can create new catalysts and compounds when exposed to cycles of heat and ultraviolet radiation.

The article, entitled 'Pumice as a Remarkable Substrate for the Origin of Life', is published in the September issue of Astrobiology.