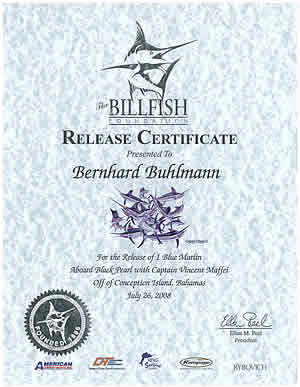 The Billfish Foundation’s new Release Certificate features the angler’s name, number of billfish species with the artwork of Carey Chen.

FORT LAUDERDALE, Florida -- The Billfish Foundation (TBF) is proud of its signature Tag & Release program now in its 20th year, and has added a new and striking “billfish release” certificate for anglers worldwide wanting to document that special fishing moment.

And now’s a great time to join TBF because the impressive 8 Â½” x 11” silver foiled stamped document -- with its Carey Chen artistry of billfish, perfect for framing to proudly display in the office or home -- is free to TBF members. The certificate highlights the angler’s name, the date and number of billfish species released, the location, captain and boat.

“It’s both an instant conversation and conservation piece,” said TBF President Ellen Peel.” It’s also a way of honoring the anglers, captains and mates, TBF’s volunteer stewards of the seas, for relaying their reports of the specific areas and conditions of the billfish they caught from the Atlantic, Pacific and Indian Oceans and then safely released. Some skippers and anglers are also equipped with our TBF tagging data kits.”

The release and or tagged reports are entered into TBF’s new data bank and also for a yearly “competition” of captains, anglers and mates who generate the most annual information.

TBF Science and Policy Specialist Elliott Stark said, “A combined total of nearly 16,000 TBF ‘tagging data reports’ and ‘release notification cards’ were generated last year. Of those 8549 billfish were released without being tagged and another 7180 billfish were tagged and then released. TBF members from more than 70 countries are invited to participate each year.

“When the report card reaches TBF that information is added in our databank. Since TBF houses the largest private database on billfish, managing bodies of domestic and international marine resources like the National Marine Fisheries Service (NMFS) and the International Commission for the Conservation of Atlantic Tuna (ICCAT) rely on TBF to update their databases increasing their knowledge of the migration behaviors of billfish,” he said.

“In turn,” said Ms. Peel, “captains, mates and anglers of all ages enjoy the release certificates as a lasting way to commemorate the catch, release and conservation of a billfish.

“We decided to give the release certificate a more modern look by adding Carey’s stunning art. He was TBF’s Artist of the Year in 2003 and we’re proud to have his support of TBF’s conservation work. Carey’s gorgeous illustrations are in numerous TBF publications and we auction original paintings of his at our October dinner each year,” she said.

Stark added, “Anglers can receive a certificate as a free premium once they become an active member of TBF ($25 annually) or purchase them for $20 a certificate whether they release or tag a billfish. Anglers must fill out the TBF release card, which gives us a record of their catch. TBF sends non-members a confirmation report about their released billfish, where the angler confirms/edits the data submitted and has the option of purchasing the certificate or becoming a member. As long as the person is an active member of TBF, they can receive an unlimited amount of certificates under their name.”