Link Determined Between Unexploded Munitions In Oceans And Cancer-causing Toxins

Time Bomb: Unexploded Military Ordnance In Gulf Poses Threat To Shipping; 'It's Been 40 To 60 Years' 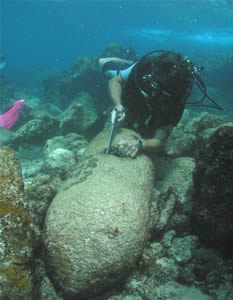 ATHENS, Georgia -- During a research trip to Puerto Rico, ecologist James Porter took samples from underwater nuclear bomb target USS Killen, expecting to find evidence of radioactive matter – instead he found a link to cancer. Data revealed that the closer corals and marine life were to unexploded bombs from the World War II vessel and the surrounding target range, the higher the rates of carcinogenic materials.

"Unexploded bombs are in the ocean for a variety of reasons – some were duds that did not explode, others were dumped in the ocean as a means of disposal," said Porter. "And we now know that these munitions are leaking cancer-causing materials and endangering sea life."

These findings will be presented at the Second International Dialogue on Underwater Munitions on February 25-27 in Honolulu. Data has been gathered since 1999 on the eastern end of the Isla de Vieques, Puerto Rico – a land and sea area that was used as a naval gunnery and bombing range from 1943-2003. Research revealed that marine life including reef-building corals, feather duster worms and sea urchins closest to the bomb and bomb fragments had the highest levels of toxicity. In fact, carcinogenic materials were found in concentrations up to 100,000 times over established safe limits. This danger zone covered a span of up to two meters from the bomb and its fragments.

According to research conducted in Vieques, residents here have a 23% higher cancer rate than do Puerto Rican mainlanders. Porter said a future step will be "to determine the link from unexploded munitions to marine life to the dinner plate."

While Porter believes every nation with a coastline has problems with unexploded munitions, there is a solution.

"With the creation of the Ordinance Recovery System, we now have a way to safely remove unexploded munitions," he said.

The machine picks up unexploded bombs off the sea floor and delivers them safely to a lift basket for surface disposal or deep sea burial. It is operated remotely with proportional toggle switches that allow much more fine control of the delicate undersea operation than an on/off button. The system relies on an underwater hydraulic system designed James Barton, president of Underwater Ordinance Recovery, Inc., with the technical expertise of machinists at the UGA instrument shop.