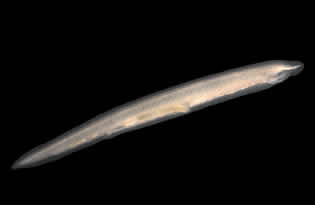 GAINSVILLE, Florida -- Armed at first with nothing more than boots, a screen and a bucket, scientists studying a tiny primitive fish that makes up 70 percent of the biomass in Tampa Bay now say they have found the “missing link” marking the point in evolution that led to the development of the modern-day human immune system.

The inch-long spineless fish, called a lancelet, produces a key immune system protein that is similar to but much hardier than the version found in people. The bay waters are a microbial soup teeming with microorganisms, yet the worm-like bottom-feeder is remarkably adept at standing up to the bacterial, viral and chemical threats in its environment. Understanding how it does so could lead to improved biodefense and better immune-boosting drugs to fight cancer and disorders such as rheumatoid arthritis, say scientists at the University of Florida and the University of South Florida, who reported their findings recently in Nature Immunology.

“At a basic level, this sea worm tells us about the evolution of the immune response; specifically, it tells us that primitive organisms have more sophisticated immune systems than we previously thought,” said X-ray crystallographer David Ostrov, an assistant professor of pathology, immunology and laboratory medicine at UF’s College of Medicine who is affiliated with the UF Shands Cancer Center. “This is the first organism below the level of jawed vertebrates that expresses the type of proteins we use in our own complex adaptive immune system.”

The human immune system is constantly at work, on guard to tackle new ills while remembering past offenders. Compared with its predecessors on the evolutionary tree, the lancelet shares genes and proteins remarkably similar to ours that enable it to also skillfully elude attack.

“This influences our therapeutic strategy because we must consider that an organism we are trying to target may have an elaborate defensive system of its own, with features that neutralize what we’re trying to do to it,” Ostrov said. “For example, if we’re trying to create a vaccine against a specific pathogen such as anthrax, smallpox or bird flu, we have to take into account the defensive measures those and other organisms might have.”

Organisms such as plants, fungi and primitive animal life are classified as having an innate immune system, which defends against invaders by recognizing predetermined patterns of molecules. About 520 million years ago, a different form of immunity emerged — the adaptive immune system, shared by humans and other organisms with jaws and vertebrae. This type relies on an army of antibodies and other immune system cells to customize its response to an array of pathogens and remember the encounter for future reference.

“We were asking the question why and where did this sharp division occur? What were the most primitive organisms that exhibit the molecules that we use in our adaptive immune systems?” Ostrov said.

In their most recent study, UF and USF scientists — including geneticist Gary Litman, of USF’s Moffitt Cancer Center — bombarded a highly concentrated, crystallized form of an immune system protein isolated from the fish with X-rays, yielding incredibly high-resolution images of its structure. The lancelet also is known as amphioxus, or by the scientific name Branchiostoma floridae.

That means scientists can actually see where individual hydrogen atoms are positioned in the protein’s core, providing clues as to which atoms are participating in key stabilizing interactions.

Doctors often use infusions of antibodies to bolster immune systems weakened by cancer or other conditions, but ironically, these proteins are susceptible to enzymes that break them down. A number of such monoclonal antibody-based drugs are in clinical use, such as Herceptin for breast cancer or Avastin for colorectal cancer.

The lancelet’s immune response proteins, however, are resilient. Understanding their essential architecture with such precision could lead to new, improved types of antibody-based therapies that are better able to persist in the body, Ostrov said.

“If we could take advantage of the atomic level structural features that we see, particularly those structural features at the stable core of this molecule, then we expect to design and produce more stable monoclonal antibodies for therapy,” he said.

“However, I expect that further research will be required to corroborate some of the key evolutionary interpretations and to place this study in fuller perspective,” Greenspan said. “Should the authors’ views prove to be basically correct, the study would offer the prospect of enhancing our understanding of the structural requirements for molecules used by the adaptive immune response to recognize and counter components of invading microbes. If so, it would provide an illustration of the potential for studies of diverse species, even those that at first glance may appear to be of no special interest, to yield information of value in understanding human physiology and of use in facilitating medical advances.”