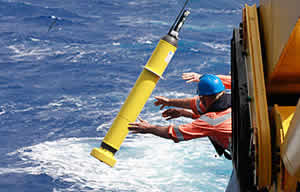 VICTORIA, Australia -- Australian scientists have sought the help of the United States and Australian navies to plug a critical gap in their Argo ocean and climate monitoring program caused by Somali pirates operating in the western Indian Ocean.

"We have not been able to seed about one quarter of the Indian Ocean since the increase in the piracy and that has implications for understanding a region of influence in Australian and south Asian weather and climate," says CSIRO Wealth from Oceans Flagship scientist, Dr Ann Thresher. Over 30 nations contribute to the multi-million dollar Argo project, in which 3,000 robotic instruments provide near real-time observations of conditions such as heat and salinity in the top 2,000 meters of the ocean.

Australia, through CSIRO and the Integrated Marine Observing System (IMOS), ranks second among countries based on the number of profilers providing data, with more than 325 profilers reporting to international data centers from the Indian, Pacific and Southern Oceans and the Tasman Sea. At nearly two meters in length the drifting profilers, or 'floats', are programmed to drift at 1000m for 10 days, then fall to 2000m and sample as they ascend to the surface to upload their data to satellites.

Although the Argo project offers shipping and defense benefits, its primary objective is to monitor ocean heat and salinity patterns that drive the climate and monsoonal systems which bring rain to Australia.

Dr Thresher said the program is heavily reliant on commercial shipping and research and chartered vessels to deploy the instruments.

"With the region north of Mauritius being a no-go area for most vessels due to pirate activity, we have approached the US and Australian navies to assist us in deployments of around 20 profilers, including 10 provided by the United Kingdom Argo project.

"This level of international and military cooperation is tremendously important to us in building a sustainable operating ocean-borne system that is providing the data at the core of current weather and climate observations and prediction," Dr Thresher said.

CSIRO is shipping one profiler to Florida for deployment by the US Navy, and is asking the Royal Australian Navy for help deploy another eight instruments in the area of highest risk.

A 20-meter South African yacht, Lady Amber, is under charter to CSIRO and has successfully deployed seven instruments near Mauritius in the Western Indian Ocean. Her working area, however, was severely restricted by pirate activity in this area and the positions of several profilers had to be changed to accommodate these restrictions. She will deploy another 15 instrument as she transits between Mauritius and Fremantle, where she will pick up another 39 floats for deployment northwest of the Australian North West Shelf â an area thankfully free of piracy.

The International Argo Steering Team is co-chaired by CSIRO oceanographer, Dr Susan Wijffels and Professor Dean Roemmich from the Scripps Institution of Oceanography (US).

Dr Wijffels said Argo is now an essential climate and ocean-observing infrastructure and researchers are continuing to review its coverage to ensure gaps in the global network do not open us, such as in the western Indian Ocean. In the future Argo measurements might extend below 2,000 meters and reach into the ocean beneath the polar ice, where currently few measurements are routinely made.

This work is part of the Australian Climate Change Science Program, funded jointly by the Department of Climate Change and Energy Efficiency, the Bureau of Meteorology and CSIRO.