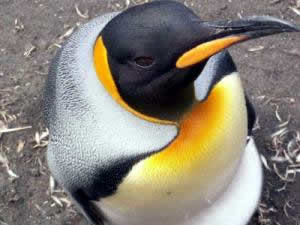 The king penguin is an ideal proxy for measuring climate change

GLASGOW, Scotland -- We are used to hearing about the effects of climate change in terms of unusual animal behaviour, such as altering patterns of fish and bird migration. However, scientists at the University of Birmingham are trying out an alternative bio-indicator â the king penguin â to investigate whether they can be used to monitor the effects of climate change.

âIf penguins are travelling further or diving deeper for food, that tells us something about the availability of particular fish in regions of the Antarctic. We may be able to assess the pressure exerted by king penguins on this ecosystem, and look at the effects of both climate change and overfishing in this region of the worldâ, says Dr Lewis Halsey who will present his results on Wednesday 4th April at the Society for Experimental Biologyâs Annual Meeting in Glasgow.

A new way of using animals as bio-indicators is to ascertain their energy requirements. Dr Halsey and co-workers measured the heart rate and energy expenditure of king penguins whilst walking on a treadmill and whilst swimming in a long water channel, and obtained relationships between these two variables. They then implanted heart rate loggers in penguins going to sea such that they could infer the energy expended by these birds from the recorded heart rate. Researchers were then able to find out if there was a correlation between the energetic costs of foraging at sea and the levels of fish available to the penguins i.e. did penguins have to work harder when food was scarce.

King penguins are good candidates as bio-indicators for several reasons. Firstly, while at sea foraging, they cover hundreds of kilometres and are able to dive to depths of several hundred metres, so they explore a relatively large portion of the expansive Southern Oceans. Secondly, the diets of several populations of king penguins are well known. Thirdly, while foraging for food is done at sea the penguins also come ashore to breed and moult, making them accessible to researchers. -Society for Experimental Biology