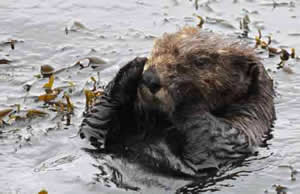 This southern sea otter is settling down to rest in a small patch of Egregia (feather boa kelp). credit Photographer: Lilian Carswell, USGS

SANTA CRUZ, California -- The recovery of southern sea otters appears to have taken an upturn, according to results from the annual California sea otter survey released by the U.S. Geological Survey today. Yet despite an overall increase in sea otter abundance, sharks have been "taking a bite" out of the portion of the population that could fuel expansion into new areas.

"There's much more to the story here than the main finding would suggest," said Dr. Tim Tinker, a research ecologist who leads the USGS sea otter research program, "We are looking into various factors that may be affecting the survey results, including a boom in urchin abundance from Big Sur to Monterey that may explain the uptick in numbers in the range center, and high levels of shark bite mortality that are likely responsible for continued declines at the north and south ends of the range."

This year's survey results suggest an increasing trend over the last five years of almost 2 percent per year and the population index, a statistical representation of the entire population calculated as the three-year running average of census counts, has climbed to 3,054 from 2,711 in 2010. The growth is accounted for by an unexpected jump in numbers in the center of the sea otter's range, an area that spans from Monterey south to Cambria.

"It appears that the high pup counts from the last few years might be translating into higher numbers of juveniles and adults in the center of the range," said Brian Hatfield, the USGS biologist who coordinates the annual census. "This makes sense if there are significantly more sea urchin prey available to them in those areas. However, our long-term census data suggests the elevated numbers of otters seen during this survey along the Monterey-Big Sur coast may not persist."

While the population index continues to trend upward, the northern and southern subsets of the population continue a negative five-year decline, dropping 2 percent and 3.4 percent per year, respectively, numbers consistent with increased shark bite induced mortality in these same areas. The increase in white shark bites became evident after 2005 and now appears to be impacting the growth and expansion of the population at the peripheries of the range, as described in a recent publication.

Since the 1980s, USGS scientists have computed the annual population index and evaluated trends in the southern sea otter, "Enhydra lutris nereis," a federally listed threatened species found in California. For southern sea otters to be considered for removal from threatened species listing under the Endangered Species Act, the population index would have to exceed 3,090 for three consecutive years, according to the threshold established under the Southern Sea Otter Recovery Plan by the U.S. Fish and Wildlife Service. To reach its optimum sustainable population level under the Marine Mammal Protection Act, the number of animals that will result in the maximum productivity of the population, keeping in mind the carrying capacity of the habitat and the health of the ecosystem, the southern sea otter population would have to reach a much higher bar, probably at least 8,400 animals in California according to the Recovery Plan.

"On the surface it appears that the population is climbing towards recovery," said Lilian Carswell, Southern Sea Otter Recovery Coordinator for USFWS, "but it's clear the underlying trends in different regions must be taken into consideration. Full recovery of the population will ultimately require range expansion to the north and south."

In addition to conducting the annual survey, USGS scientists also annually update a database of sea otter strandings which tallies the number of dead, sick or injured sea otters recovered along California's coast each year. In 2014, scientists from California Department of Fish and Wildlife, known as CDFW, USGS, Monterey Bay Aquarium and other institutions recovered or documented a total of 386 stranded sea otters.

This stranding number only accounts for sea otters that people find, and past research indicates that possibly less than 50 percent of sea otters that die in the wild end up on the beach. But efforts are made to examine each reported sea otter carcass, and a subset of fresh carcasses are sent to the CDFW Marine Wildlife Veterinary Care and Research Center, where scientists conduct necropsies to determine the primary causes of death and identify factors that may have contributed to the death of each animal.

Data from both living and deceased sea otters continues to shed light on sea otter population ecology in different parts of the California coast. For example, a high proportion of sea otter carcasses recovered between Cayucos and Pismo Beach in recent years have white shark- bite wounds, a potential explanation for the downward trend in sea otter numbers in that area.

"Before the early 2000s we did not see very many shark bitten otters south of Monterey," says Mike Harris, a biologist with CDFW, "but in the last few years, shark bite cases have become very common and now explain about 70 percent of the total strandings in this area."

The sea otter survey and stranding programs are just one part of a larger research program investigating sea otters and their role as predators in coastal ecosystems. In Elkhorn Slough, a recent study suggests that sea otters' appetite for crabs can improve the health of seagrass beds, and USGS scientists are collaborating with biologists from the Monterey Bay Aquarium, the Elkhorn Slough National Estuarine Research Reserve, University of California Santa Cruz and CDFW to study the population in this unique habitat. And a new study near Monterey by UCSC and USGS, in collaboration with Monterey Bay Aquarium, will investigate how sea otters are responding to a glut of sea urchins that may be in part a result of the loss of sea star predators from wasting disease.

â The annual population index is calculated from visual surveys conducted via telescope observations from shore and via low-flying aircraft along the California coastline by researchers, students and volunteers from USGS, CDFW's Office of Spill Prevention and Response, Monterey Bay Aquarium, UC Santa Cruz, USFWS, and U.S. Bureau of Ocean Energy Management.