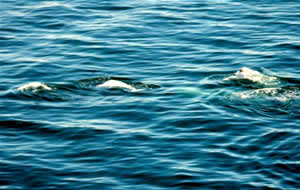 ANCHORAGE, Alaska -- NOAA Fisheries Service biologists estimate a beluga whale population of 375 in the Cook Inlet near Anchorage, Alaska, according to data collected during their annual survey in June. This population estimate is the largest since 2001.

"While we are encouraged by this higher estimate, further surveys will be required to determine if this is a reliable upward population trend," said Alaska Fisheries Science Center Director Doug DeMaster.

Federal laws and voluntary efforts by the Alaska Native hunters have resulted in a limited hunt of the Cook Inlet beluga whales. Between 1999 and 2007 hunters took five beluga whales for subsistence in Cook Inlet â down from 308 between 1995 and 1998.

NOAA Fisheries Service is dedicated to protecting and preserving our nation's living marine resources through scientific research, management, enforcement, and the conservation of marine mammals and other protected marine species and their habitat.

NOAA is dedicated to enhancing economic security and national safety through the prediction and research of weather and climate-related events and information service delivery for transportation, and by providing environmental stewardship of our nation's coastal and marine resources. Through the emerging Global Earth Observation System of Systems (GEOSS), NOAA is working with its federal partners, more than 70 countries and the European Commission to develop a global monitoring network that is as integrated as the planet it observes, predicts and protects.