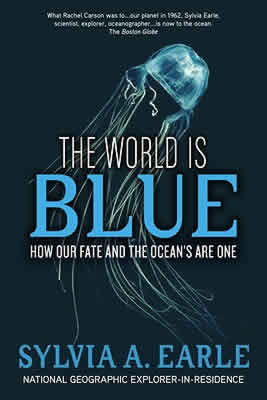 Sylvia Earle new book The World Is Blue: How Our Fate and the Ocean's Are One

WASHINGTON, D.C. -- In her latest book, published by National Geographic, world-famous marine scientist Sylvia Earle, a National Geographic Explorer-in-Residence, tells how 50 years of destructive -- and ever increasing -- oceanic change is threatening the very existence of life on Earth.

In THE WORLD IS BLUE: How Our Fate and the Ocean's Are One ( National Geographic Books; ISBN: 978-1-4262-0541-5; Sept. 15, 2009; $26; hardcover ), Earle portrays a global ecosystem on the brink of irreversible environmental crisis unless we act immediately. Time is running out, she warns, and nowhere is this clearer than in the seas, which cover three-quarters of the planet's surface -- a vast, unexplored water world upon which every living thing depends.

Weaving together anecdotes of her years of ocean exploration with the latest findings about the state of the seas, Earle shows how, since the mid-20th century, we've done untold damage to a vital system that has evolved over 3.8 billion years. For millennia the sea has seemed like an inexhaustible resource, but overexploitation has driven many species to the edge of extinction. Destructive and wasteful fishing techniques, pollution and global warming threaten everything from tiny but indispensable microorganisms to magnificent creatures like whales, tuna and swordfish.

-Ninety-five percent of some species, including bluefin tuna, Atlantic cod, American eel and certain sharks have been killed.

-Destructive fishing techniques -- trawls, longlines, rockhopping dredges -- not only continue to take too much, they have destroyed habitats and killed millions of tons of animals that are simply discarded. Each year, industrial fishing wantonly kills hundreds of thousands of marine mammals, seabirds and turtles and hundreds of millions of fish.

-Half the world's shallow coral reefs are gone or in a state of serious decline. In much of the Caribbean, 80 percent are dead. Deep coral reefs, thousands of years old, are being destroyed by new deep trawling technologies.

-More than 400 oxygen-deprived "dead zones" have formed in coastal areas in recent decades, and the number is increasing, reflecting changes in ocean chemistry.

-The ocean's pH is changing as a result of so much carbon being released into the atmosphere, causing seas to become acidic and corrosive.

"What is most troubling, perhaps," writes Earle, "is the profound, widespread ignorance about the ocean and its vital importance to everyone, everywhere, all the time. It is not just the fact that less than 5 percent of the ocean has been seen, let alone explored. Even what is known to scientists is not widely appreciated by the public, and certainly not by most policymaking officials."

Fortunately, we have not yet passed the point of no return in saving this vital resource. In this persuasive and passionate book, Earle offers solutions, actions we can take now to stem or reverse the damage before it's too late, because what we do -- or fail to do -- in the next 10 years, she says, may well resonate for the next 10,000.

The ultimate goal, Earle argues, is to find responsible, renewable, sustainable strategies that will restore the health of our blue world. These include smart aquaculture and smart seafood choices; plans of action to protect biodiversity and to mitigate and recover from the impacts of climate change, new technologies to map, photograph and explore the 95 percent of the ocean we have yet to see; and -- Earle's wish -- a global network of marine protected areas, "hope spots large enough to save the ocean, the blue heart of the planet." At present, less than 1 percent of the total area of the sea is protected.

"My wish is a big wish, but if we can make it happen, it truly can change the world and help ensure the survival of what is actually my favorite species, human beings," Earle writes.

About the Author Called "Her Deepness" by The New Yorker and The New York Times and a "Living Legend" by the Library of Congress, Sylvia Earle is an oceanographer, explorer, author and lecturer. She is leader of the Sustainable Seas Expeditions, chair of the Advisory Councils for the Harte Research Institute and for the Ocean in Google Earth. Earle is a 2009 recipient of the coveted TED Prize for her proposal to establish a global network of marine protected areas. She has authored more than 175 publications and lectured in over 70 countries.