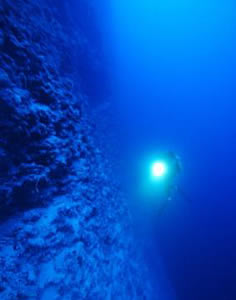 Jeff Godfrey puts on the brakes and explores a depth of 330fsw. credit M. Lombardi 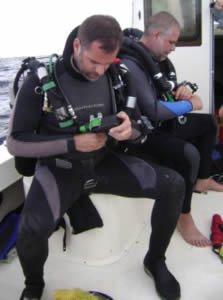 PROVIDENCE, Rhode Island -- Ocean Opportunity, a Rhode Island based not for profit organization, is pleased to announce the safe and successful return of an expedition to explore and document the natural history of the mesophotic, or 'middle light', zone from 200 to 500 feet in the Exumas, Bahamas from April 28 through May 8th. The project was hosted at the John H. Perry Jr. Caribbean Research Center - a facility synonymous with a long lineage of advancements in marine technology and innovations in ocean exploration.

This expedition built upon the team's previous successes in a November project on Andros, Bahamas in which the team worked to 430 feet - more than 3 times the depth of conventional scuba diving. The expeditions are being led by Explorer Michael Lombardi, who has been funded by the National Geographic Society to carry out the work.

The deep diving team (including Jeff Godfrey of UConn and NGS/Waitt Grantee Michael Lombardi) conducted several mixed-gas closed circuit rebreather dives in excess of 300 feet, with one to 400 feet, and another reaching 446feet. These explorations allowed the team to observe, firsthand, below the presumed sealevel at the end of the Pleistocene ice age, some 370 to 420 feet below today's sealevel. Numerous images, samples, and specimens were gathered which are being evaluated by project collaborators.

Lombardi commented, "working to the lower limits of this newly accessible realm is wrought with challenges from a technical and psychological perspective. We are working with the best and brightest in the industry to improve human accessibility to this alien environment, and bring back data and knowledge from each dive that will advance the necessary life support technologies to improve in-water efficiency, and catalyze scientific discoveries."

When asked 'why work to the frontier limits of manned exploration?', Lombardi states, "The reaction time, real-time decision making, and personal interaction offered by wet diving at these depths, as opposed to robotics use, brings the raw and intimate experience of human exploration back into the game. Nearly 70 years of marine science has been fueled by the ability to routinely access the shallow coral reef ecosystems - that excitement, and creativity made possible by a researcher actually being there catalyzed the marine science field that we know today. We are on the verge of creating an opportunity for the next 70 years. This is a very exciting time for benthic marine scientists."