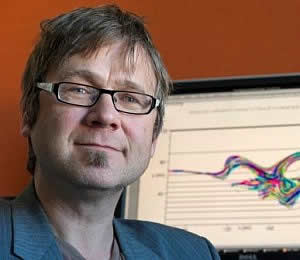 Research by oceanographer Jochen Kaempf has shed new light on the movement of nutrient-rich water generated in coast canyons.

The research, published in the prestigious international journal Continental Shelf Research, represents an international breakthrough in the understanding of the dynamics of coastal upwelling systems.

Upwelling centers are regions in which vast amounts of dissolved nutrients are brought into the surface layers of the ocean. Associate Professor Kaempf said that although they occupy only one-tenth of one per cent of the ocean's surface, upwelling regions produce about 50 per cent of the world's fish supply.

While submarine canyons, such as those off Kangaroo Island, have long been recognized as a local source of nutrients, Associate Professor Kaempf has revealed that their effect extends much farther than previously known.

Mathematical computer modeling by Associate Professor Kaempf has shown that the interaction of coastal flows with a submarine canyon can trigger a special type of wave, known as a "stationary topographic Rossby wave".

These waves in turn create substantial onshore fluxes of dissolved nutrients in a near-bottom layer that can extend over distances as far as 100 kilometers "downstream" from a canyon, playing a vital role in the supply of nutrients to coastal upwelling centers.

"When the nutrients are brought to the euphotic zone, the uppermost ocean layer, they combine with light and oxygen to bring life to the marine food chain via photosynthesis and the massive growth of phytoplankton."

In the case of South Australia, he said the interaction of prevailing seasonal currents with submarine canyons and the coastline of Kangaroo Island is crucial to the creation of the ecologically important coastal upwelling centre along the southern tip of Eyre Peninsula, forming part of the Great South Australian Coastal Upwelling System.