Group: Increased Protection Urgently Needed For Threatened Tunas; 'Marine Life And Jobs For Future Generations Are Both At Stake' 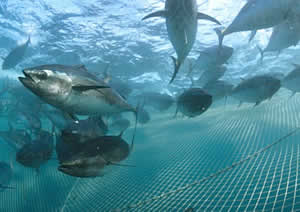 GLAND, Switzerland -- For the first time, all species of scombrids (tunas, bonitos, mackerels and Spanish mackerels) and billfishes (swordfish and marlins) have been assessed for the IUCN Red List of Threatened Speciesâ ¢. Of the 61 known species, seven are classified in a threatened category, being at serious risk of extinction. Four species are listed as Near Threatened and nearly two-thirds have been placed in the Least Concern category.

The results show that the situation is particularly serious for tunas. Five of the eight species of tuna are in the threatened or Near Threatened IUCN Red List Categories. These include: Southern Bluefin (Thunnus maccoyii), Critically Endangered; Atlantic Bluefin (T. thynnus), Endangered; Bigeye (T. obesus), Vulnerable; Yellowfin (T. albacares), Near Threatened; and Albacore (T. alalunga), Near Threatened.

This new information will be invaluable in helping governments make decisions which will safeguard the future of these species, many of which are of extremely high economic value, and is a timely input for the 3rd Joint Meeting of the Tuna RFMOs (Regional Fisheries Management Organizations) being held in La Jolla, California, July 11-15.

"This is the first time that fishery scientists, ichthyologists and conservationists have come together to jointly produce an assessment of the threats facing a commercially important group of fishes," says Dr Bruce B. Collette, Chair of the IUCN Species Survival Commission's (SSC) Tuna and Billfish Specialist Group, Senior Scientist of NOAA's National Marine Fisheries Service, and lead author of the paper.

There is growing concern that in spite of the healthy status of several epipelagic fish stocks (those living near the surface), some scombrid and billfish species are being heavily overfished, and there is a lack of resolve to protect against overexploitation driven by high prices. Many populations are exploited by multinational fisheries whose regulation, from a political perspective, is exceedingly difficult.

"All three bluefin tuna species are susceptible to collapse under continued excessive fishing pressure. The Southern Bluefin has already essentially crashed, with little hope of recovery," says Dr Kent Carpenter, Professor at Old Dominion University, manager of IUCN's Marine Biodiversity Unit and an author of the paper. "If no changes are made to current fishing practices, the western Atlantic Bluefin stocks are at risk of collapse as they are showing little sign that the population is rebuilding following a significant reduction in the 1970s."

Most of the long-lived economically valuable species are considered threatened. They mature later than short-lived species and their reproductive turnover is longer, and as such recovery from population declines takes more time. As these scombrids and billfishes are at the top of the pelagic food web, population reductions of these predators may cause significant negative effects on other species that are critical to the balance of the marine ecosystem and that are economically important as a source of food.

The future of threatened scombrids and billfishes rests on the ability of RFMOs and fishing nations to properly manage these species. Southern and Atlantic Bluefin populations have been so reduced that the most efficient way to avoid collapse is to shut down the fisheries until stocks are rebuilt to healthy levels. However, this would cause substantial economic hardship and hinder the ability of RFMOs to control fishing because of the increased incentive for illegal fishing that would be created under these circumstances.

"Temporarily shutting down tuna fisheries would only be a part of a much needed recovery program. In order to prevent illegal fishing, strong deterrents need to be implemented," says Jean-Christophe ViÃ©, Deputy Director, IUCN's Global Species Programme. "This new study shows that there is an urgent need for effective management. Scientific findings should not be discarded in order to maintain short-term profit. Marine life and jobs for future generations are both at stake."

The recovery of fish stocks is possible through reducing fishing-induced mortality rates to well below the maximum sustainable yield (MSY), as shown in the case of the highly valued eastern population of the Atlantic Bluefin. Recently exploited at three times the MSY, a decrease in the total allowable catch and stricter monitoring and compliance measures have led to recent catch reductions of almost 75% over the past few years. This will enable the species to recover to sustainable levels as long as the current fishing controls are maintained.