Study: Shellfish Back on the “Good” List; Actually Low in Cholesterol, High in Omega-3's 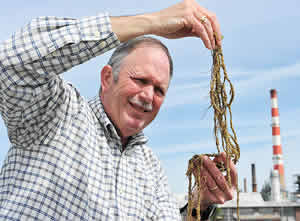 STORRS, Connecticut -- Charles Yarish is, by his own definition, a seaweed enthusiast. Over his 35-year career, the Stamford professor of ecology and evolutionary biology has followed his marine algae instincts around the world, studying seaweeds' relationships, their physiology, and their interactions with the world around them.

Yarish's most recent endeavor will use seaweeds to clean up pollution from human sources, as well as waste from fish and even people. This approach, dubbed extractive aquaculture or bioextraction, promises to use the physiological properties of seaweeds and other organisms to clean up excess nutrients in polluted areas, making them healthier, more productive, and more economically viable.

"Nutrient-enriched systems can contribute to harmful algal blooms, which deplete oxygen in the water," says Yarish. "Shellfish and seaweeds can provide good ecosystem services by extracting organic and inorganic nutrients from seawater."

Integrated multi-trophic aquaculture (IMTA) is not a new idea: cultures in ancient Egypt and China used these natural techniques, says Yarish. By bringing animals and plants from different trophic levels â different levels on the food chain â into the same place, aquaculture can function more like a natural ecosystem.

Over the past year, Yarish and his colleagues received nearly $200,000 in funding from the Connecticut Sea Grant College Program and the NOAA Small Business Innovation Fund both to grow seaweeds for human consumption and to develop technologies that will support IMTA in New England coastal waters.

Many types of seaweed need water rich in inorganic nutrients such as nitrogen and phosphorous to survive. "Fish poop," says Yarish, is made up of just these nutrients, and so provides sustenance for the seaweeds. Human products that find their way into waterways, such as nutrients derived from sewage treatment facilities and from land runoff, also provide these nutrients. To convince people to use seaweeds to clean up their waters, Yarish first wanted to make his techniques viable and available for small businesses. In February 2010, he and colleague Chris Neefus of the University of New Hampshire established a seaweed culture in his laboratory that could be used as a "seed bank" for aquaculturists to begin growing the seaweeds on their farms.

The researchers also worked with students and faculty at the Bridgeport Regional Aquaculture Science and Technology Education Center, a specialized high school that that introduces young people to the marine science and technology involved in aquaculture. Here, they created an open-source online resource detailing the specific techniques for cultivating seaweeds in aquaculture.

Their efforts have already started to pay off. The techniques have been used by Ocean Approved, a sea vegetable company from Portland, Me., which is working with Yarish and his graduate student Sarah Redmond to grow edible kelp (a type of seaweed) near Bangs Island, Me.

Yarish is working with Ocean Approved to establish a kelp culture that grows on ropes suspended in the water column and attached to floats or raft systems from the company's mussel farm. The company now harvests and sells its all-natural kelp to Whole Foods markets in New England.

"It's a high-value, good-tasting, biosecure product," says Yarish, referring to the lack of contaminants found in the kelp. Convincing people that they can not only clean up the nutrient enrichment in their waters but receive economic benefits in the form of a new product, he says, is key to the success of his program.

Cleaning up the East River

Now Yarish plans to take the concept of bioextraction even further. As part of a $2.4 million initiative funded by the Long Island Sound Futures Fund, he is working to establish and support conservation projects in the coastal communities of the Sound. Portions of the Futures Fund monies originated with the U.S. Environmental Protection Agency, the Long Island Sound Study, and the National Fish and Wildlife Foundation.

The Long Island Sound has a long history of acting as a giant receptacle for human pollution. Its waters are consistently high in nutrients from waste water treatment plants and land runoff. In particular, the East River, which runs between the Hudson River and Long Island Sound through New York City, handles enormous amounts of nutrients created by the millions of people in its immediate vicinity.

"The question is: Can we use the extraction capabilities of seaweeds and mussels as a bioremediation tool for a costal waterway in the U.S.?" asks Yarish.

Just as seaweeds remove inorganic nutrients from water, clams, mussels, and their relatives filter organically bound particles rich in nutrients. The combination of these two organisms, says Yarish, could be a powerful tool in cleaning up nutrient-enriched areas.

Yarish and his colleagues are beginning to grow seedstock of a native red seaweed, known as Gracilaria, in his laboratory nursery systems for use in the East River. Once Yarish's seaweeds are growing healthily, they will be transferred to the Bridgeport Regional Aquaculture Science and Technology Education Center. Yarish's young seaweeds will then grow in the school's large tanks until they large enough to be moved to its open water research farm in western Long Island Sound and in the East River.

In June, with the help of the Milford laboratory of the National Marine Fisheries Service, Purchase College of the State University of New York, and a non-governmental organization called Rocking the Boat, Yarish hopes to add Gracilaria to a system adjacent to a raft containing ribbed mussels near the confluence of the Bronx River and the East River. Long lines of the red seaweed will grow on these ropes from late spring through the fall. Yarish's goal is to produce enough biomass of the seaweed so that coastal managers can model the bioextraction services of the seaweed and ribbed mussels.

The combination of seaweed and filter-feeding mussels will extract both inorganic and organic nutrients, Yarish hopes. If the experiment is successful, he says, it could be applied not just to Long Island Sound and the East River, but anywhere in the world.

Yarish is also working on IMTA systems that are used to raise fish for commercial purposes. In most aquaculture systems, fish are bred and raised in an enclosed area, usually along a coastline or in land-based tank systems. Unlike wild fish populations, which can move freely in the ocean, so-called "fed" fish are restricted to a particular area, and their waste products can pollute the surrounding waters.

Above all, says Yarish, the important next steps are to scale up the bioextraction properties these and other extractive organisms have at a small scale to the level of an ecosystem.

"This kind of bioremediation effort hasn't yet happened at an ecosystem level," says Yarish. "We need to team the seaweed with the filter feeders. We want to do this at a level that hasn't been seen before."