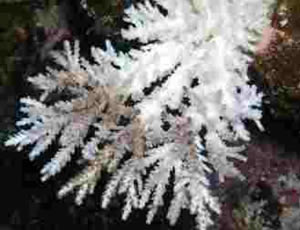 Coral bleaching is one of the most visible impacts of climate change on marine ecosystems. Credit: Andrew C. Baker

VIRGINIA KEY, Florida -- In the journal Estuarine, Coastal and Shelf Science, University of Miami Rosenstiel School of Marine and Atmospheric Science Professor Dr. Peter Glynn, and 2008 Pew Fellow for Marine Conservation and Assistant Professor Dr. Andrew Baker, assess more than 25 years of data on reef ecosystems recovery from climate change-related episodes of coral bleaching. Coral bleaching – in which corals expel their symbiotic algal partners and turn pale or white – is one of the most visible impacts of climate change on marine ecosystems. Typically caused by higher-than-normal ocean temperatures, it can lead to widespread death of corals and is a major contributor to the rapid decline of coral reef ecosystems worldwide.

The paper, co-authored by Dr. Bernhard Riegl, associate director of the National Coral Reef Institute, represents the first comprehensive review of long-term global patterns in reef recovery following bleaching events. Bringing together the results of dozens of bleaching studies, the article reports that bleaching episodes set the stage for diverse secondary impacts on reef health, including coral disease, the breakdown of reef framework, and the loss of critical habitat for reef fishes and other important marine animals.

"Bleaching has resulted in catastrophic loss of coral cover in some locations, and has changed the coral community structure in many others," said Glynn. "These dramatic fluctuations have critical impacts on the maintenance of biodiversity in the marine tropics, which is essential to the survival of many tropical and sub-tropical economies."

However, the paper also shows that, while bleaching episodes have resulted in dramatic loss of coral cover in certain locations, reefs vary dramatically in their ability to bounce back from these disturbances. It also evaluates factors explaining why some species of coral recover better than others, as well as why some reef regions are recovering while others are not.

The study finds that reefs in the Indian Ocean are recovering relatively well from a single devastating bleaching event in 1998. In contrast, western Atlantic (Caribbean) reefs have generally failed to recover from multiple smaller bleaching events and a diverse set of chronic additional stressors such as diseases, overfishing and nutrient pollution. No clear trends were found in the eastern Pacific, the central-southern-western Pacific or the Arabian Gulf, where some reefs are recovering and others are not.

"These findings illustrate how coral reefs, under the right conditions, can demonstrate resilience and recover from bleaching, even when it initially appears catastrophic", said Baker. "What prevents them from doing so is the lethal prescription of combined, additional stressors that prevent them from recovering in-between recurrent bleaching events. If we can remove or reduce these stressors we might give reefs a fighting chance of surviving climate change".

The paper entitled "Climate change and coral reef bleaching: An ecological assessment of long-term impacts, recovery trends and future outlook" also discusses potential mitigation and intervention strategies that might maximize coral reef survival in the coming years. It concludes that bleaching disturbances are likely to become a chronic stress in many reef areas in the coming decades, and coral communities, if they cannot recover quickly enough, are likely to be reduced to their most hardy or adaptable constituents. Unless significant reductions in greenhouse gas emissions can be achieved within the next two to three decades, maximizing coral survivorship during this time may be critical to ensuring healthy reefs can recover in the long term.