Capt. Kidd Shipwreck Site To Be Dedicated 'Living Museum Of The Sea' By Indiana University 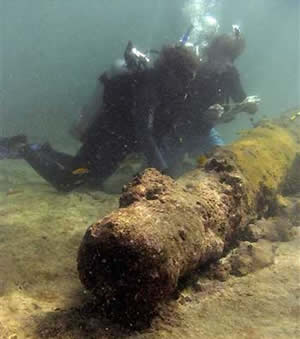 Two graduate students document one of the cannons found in the shallow waters off Catalina Island.

BLOOMINGTON, Indiana -- Resting in less than 10 feet of Caribbean seawater, the wreckage of Quedagh Merchant, the ship abandoned by the scandalous 17th century pirate Captain William Kidd as he raced to New York in an ill-fated attempt to clear his name, has escaped discovery -- until now.

An underwater archaeology team from Indiana University announced today (Dec. 13) the discovery of the remnants. IU marine protection authority Charles Beeker said his team has been licensed to study the wreckage and to convert the site into an underwater preserve, where it will be accessible to the public.

Beeker, director of Academic Diving and Underwater Science Programs in IU Bloomington's School of Health, Physical Education and Recreation, said it is remarkable that the wreck has remained undiscovered all these years given its location, just 70 feet off the coast of Catalina Island in the Dominican Republic, and because it has been sought actively by treasure hunters.

"I've been on literally thousands of shipwrecks in my career," Beeker said. "This is one of the first sites I've been on where I haven't seen any looting. We've got a shipwreck in crystal clear, pristine water that's amazingly untouched. We want to keep it that way, so we made the announcement now to ensure the site's protection from looters."

The find is valuable because of the potential to reveal important information about piracy in the Caribbean and about the legendary Capt. Kidd, said John Foster, California's state underwater archaeologist, who is participating in the research.

"I look forward to a meticulous study of the ship, its age, its armament, its construction, its use, its contents and the reconstructed wrecking process that resulted in the site we see today," Foster said. "Because there is extensive, written documentation, this is an opportunity we rarely have to test historic information against the archaeological record."

Historians differ on whether Kidd was actually a pirate or a privateer -- someone who captured pirates. After his conviction of piracy and murder charges in a sensational London trial, he was left to hang over the River Thames for two years.

"All the evidence that we find underwater is consistent with what we know from historical documentation, which is extensive," Conrad said. "Through rigorous archeological investigations, we will conclusively prove that this is the Capt. Kidd shipwreck."

The IU team examined the shipwreck at the request of the Dominican Republic's Oficina Nacional De Patrimonio Cultural SubacuÃ¡tico.

"The site was initially discovered by a local prominent resident of Casa De Campo, who recognized the significance of the numerous cannons and requested the site be properly investigated," said ONPCS Technical Director Francis Soto. "So, I contacted IU."

Beeker and Conrad have worked closely with ONPCS for 11 years since they began conducting underwater and land-based archaeological research related to the era when the Old World and New World first met.

"It continues our work down there from the age of discovery to the golden age of piracy, the transformation of both the native and introduced cultures of the Caribbean," Conrad said.

Much of their work is focused in the area of La Isabela Bay, the site of the first permanent Spanish settlement established by Christopher Columbus. The Taino were the first indigenous people to interact with Europeans. Beeker said much of the history of this period is based on speculation, something he and Conrad are trying to change.

The IU research in the Dominican Republic typically involves professors and graduate students from various IU Bloomington schools and departments, including the School of HPER, the School of Public and Environmental Affairs, and the departments of anthropology, biology, geology and mathematics in the College of Arts and Sciences.

Anthropology doctorate student Fritz Hanselmann, who teaches underwater archaeology techniques in HPER, said there have only been a few pirate ships ever discovered in the Americas, and that IU's multi-disciplinary research will make a significant contribution to the field.

HPER Dean Robert M. Goodman accompanied the most recent expedition to learn more about this successful interdisciplinary and international research collaboration. He also went to explore potential public health linkages between the School of HPER and the Universidad Autonoma de Santo Domingo, founded in 1538. It is the largest university in the country and the oldest in the Americas.

"Indiana University is working to increase its international presence," Goodman said. "Earlier this month, the IU Board of Trustees was presented a strategic plan that calls for increased student and faculty participation in study abroad and international service learning programs, as well as the development of strategic international partnerships that support overseas study, global research and the recruitment of international students.

"The archeological work being done by IU in the Dominican Republic affords us tremendous entrÃ©e for wider areas of collaboration," he said. "Because of the network that Mr. Beeker and Dr. Conrad have established, the Universidad AutonÃ³ma de Santo Domingo is eager to establish a formal agreement with IU. We met with the secretary of state for environment and national resources, the dean of faculties of health sciences at the university, representatives from USAID, and the president of the hotel association, all of whom are eager to foster relationships between IU and agencies of the Dominican Republic. This was an incredibly productive trip for IU."

Beeker and his students have conducted underwater research projects on submerged ships, cargo and other cultural and biological resources throughout the United States and the Caribbean for more than 20 years. Many of his research projects have resulted in the establishment of state or federal underwater parks and preserves, and have led to a number of site nominations to the National Register of Historic Places.