Group: Needless Fish Warnings Not Good ‘Science,’ Not ‘In The Public Interest’ 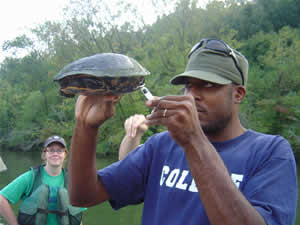 CHARLESTON, North Carolina -- A young Bahamian scientist’s groundbreaking study on freshwater turtles has earned him the opportunity to be featured in one of the world’s leading international journals. Stefan Moss, who spent two years collecting samples and data from the reptiles he encountered in the Tennessee River will now have the findings of his research documented in Chemosphere.

Chemosphere is a well-known international journal focused on disseminating information related to all aspects of environmental science, especially important new discoveries or further developments in important fields of investigation related to the environment and human health.

Hard work has certainly paid off for Moss who was born in Grand Bahama but raised in the capital city of Nassau by his parents Keith and Sylvia Moss Greenwade. He double majored in Chemistry and Biology and plans to duplicate his efforts on the Tennessee turtles to the endangered freshwater turtles in his native Bahamas, particularly on the islands of Inagua, Cat Island and Eleuthera.

“It didn’t start off as me with aspirations of getting published in a respected journal like Chemosphere,” admits Moss. “As an environmental scientist, I was more focused on figuring out what chemicals were in the river and their affects on the environment, and possibly human health. Instead, it seems I uncovered - and documented - a lot of valuable information in the field of herpetology, which is the study of reptiles and amphibians.”

“The project, which was funded by a conservation grant from the Tennessee Aquarium Research Institute (TNARI) focused on the freshwater turtles in the river because they are long lived organisms and are therefore able to provide a large quantity of data over a longer period of time,” added Moss. “Sure enough, after two years of collecting body measurements and blood samples, there was so much new information on them that my professor Dr. Thomas Wilson challenged me to publish it. Unbelievably, after four years of work, it’s going to be published.”

Moss’ work led him to the National Institute of Science and Technology (NIST) in Charleston, North Carolina, where he worked in the Hollings Marine Laboratory. He also collaborated with renowned sea turtle scientist Dr. Jennifer Keller who allowed him access to the facilities for weeks at a time, which he took to his advantage sometimes working as much as 20 hours a day.

“Being recognized for this work is the highlight of my scientific career thus far,” says Moss. “It’s now a new contribution to science in an area that’s been studied before but not in this particular way. I feel that Bahamians need to become more environmentally conscious and continue their efforts of encouraging students to take up science careers. I am confident that if we get creative and think beyond the norm, we can offer exciting opportunities to our own scientists and those visiting our nation. There is still a whole lot we don’t know about our country in terms of science and I hope to come back home and help contribute to eradicating the brain drain we so frequently hear about. We must come together, and pool our talents into making The Bahamas a model country as it relates to science.”