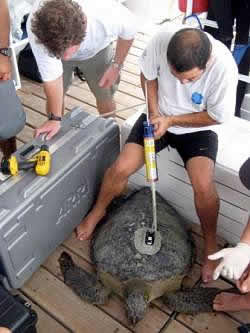 A turtle with a satellite tag being attached. photo copyright Todd Steiner

FOREST KNOLLS, California -- A 10-day sea turtle tagging research expedition to Cocos Island National Park, Costa Rica successfully outfitted three green turtles and one hawksbill turtle with satellite transmitters in order to follow their movements, as part of a long-term research project to understand the importance of Cocos Island for highly pelagic species that migrate throughout the Pacific. The aim of the study is to document migration patterns of east Pacific endangered marine species in order to establish protected migration corridors for these species.

Each time one of the four sea turtles surfaces for air, the high-tech satellite transmitter, glued to its shell with epoxy, sends a signal to a series of satellites circling the Earth, which determines the turtle location and the water temperature, and sends the information directly to researchers' computers.

"If we don't better manage industrial fisheries to avoid interactions with the ancient sea turtles that out-survived the dinosaurs, we will lose some species in the very near future," said Todd Steiner, trip co-leader who is a biologist and executive director of Turtle Island Restoration Network based in Northern California. "The best way to do this is to understand turtle migrations and reduce fishing effort, especially in migration hot-spots."

"The information we are collecting is necessary if we are to protect these amazing species as they migrate thousands of miles across the Pacific, where they encounter commercial fishing operations, which catch and kills thousands of turtles every year," said Randall Arauz, President of the Costa Rican NGO, and co-leader of the trip with Steiner.

In total, 26 sea turtles were also marked given permanent flipper identification (ID) tags and nine turtles received acoustic tags, which are recorded by underwater receivers placed around Cocos Island, as well as other sites in the Pacific, including the Galapagos Islands, Ecuador, and Malpelo Island, Colombia.

In addition to tagging sea turtles, a total of 10 hammerhead sharks were equipped with acoustical tags on this trip. Previous tagged hammerheads indicate the sharks move back and forth between Cocos, Galapagos, and Malpelo Islands. Additionally, a new permit was issued to PRETOMA for the collection of tissue samples to set up a marine shark and turtle "gene bank," for genetic analysis, and samples from 20 turtles and 18 white-tip sharks, were collected that will be made available to researchers.

"Cocos Island is proving to be an important feeding, resting, and nursery location for many pelagic species of sharks and turtles. To protect this international gem, Costa Rica must enact larger no-fishing zones around the island and increase enforcement activities," said Arauz. Participants included biologists and research assistants from Costa Rica, US, Colombia, Australia, and Bellarus and the expedition was used the excellent support services and accommodations of the Costa Rican-based UnderSea Hunter live-aboard dive company. To learn about the 2010 trips, visit www.seaturtles.org

Turtle Island Restoration Network is an international marine conservation organization headquartered in California, which works to protect sea turtles and marine biodiversity around the world. For more information, visit www.SeaTurtles.org