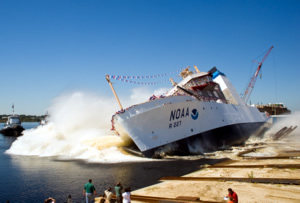 Moments before the ship was launched into the Escatawpa River, Bell M. Shimada was christened by her sponsor, Susan E. Lautenbacher, an educator and wife of retired Navy Vice Admiral Conrad C. Lautenbacher Jr., under secretary of commerce for oceans and atmosphere and NOAA administrator.

The vessel is the fourth of the same class designed to meet NOAA’s Fisheries Service specific data collection requirements and the new standards for a low acoustic signature set by the International Council for Exploration of the Seas. The 208-ft. Bell M. Shimada and her sister ships were built for NOAA by VT Halter Marine Inc., in Moss Point, Miss., as part of the Department of Commerce and NOAA fleet replacement strategy to provide world-class, state-of-the-art platforms for U.S. scientists.

“Once Bell M. Shimada goes into service, NOAA will have the latest fisheries research technologies operating on the East, West, Gulf, and Alaskan coasts,” said Vice Admiral Lautenbacher. “This will ensure we have the most accurate data on the nation’s commercial fisheries to make the best ecosystem-based management decisions. Today’s christening and launch event is a major milestone toward achieving that goal.”

Bell M. Shimada will be homeported on the West Coast. Her primary objective will be to study, monitor, and collect data on a wide range of sea life and ocean conditions, primarily in U.S. waters from Washington to southern California. The ship will also observe weather, sea state, and other environmental conditions, conduct habitat assessments, and survey marine mammal, sea turtle, and marine bird populations.

Bell M. Shimada was named by a team of students from Marina High School in Monterey, Calif., who won a regional NOAA contest to name the ship and subsequently participated in her keel laying ceremony in June 2007. The contest was an educational initiative to help students learn more about their region’s marine and coastal environment as well as to generate a greater interest in scientific studies.

The ship’s namesake was known for his contributions to the study of tropical Pacific tuna stocks, which were important to the development of West Coast commercial fisheries following World War II. Dr. Shimada and his colleagues at Pacific Fisheries Oceanic Investigations - Honolulu Laboratory were among the first to study the population dynamics of tunas and the oceanography affecting their abundance and distribution. Shimada joined the laboratory in 1948 and in 1952 moved to the Inter-American Tropical Tuna Commission in La Jolla, Calif. Dr. Shimada and fellow commission scientist Townsend Cromwell were lost in a plane crash in June 1958. Shimada Seamount in the eastern equatorial Pacific is named in his memory. Dr. Shimada’s son, Allen, is currently a fisheries scientist with NOAA.

The NOAA fleet of research and survey ships and aircraft is operated, managed and maintained by NOAA’s Office of Marine and Aviation Operations, which includes commissioned officers of the NOAA Corps and civilian wage mariners. The NOAA Corps is one of the nation’s seven uniformed services, and, as part of NOAA, is under the U.S. Department of Commerce.