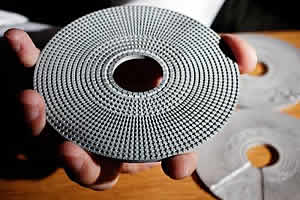 CHAMPAIGN, Illinois -- In one University of Illinois lab, invisibility is a matter of now you hear it, now you don't.

Led by mechanical science and engineering professor Nicholas Fang, Illinois researchers have demonstrated an acoustic cloak, a technology that renders underwater objects invisible to sonar and other ultrasound waves.

"We are not talking about science fiction. We are talking about controlling sound waves by bending and twisting them in a designer space," said Fang, who also is affiliated with the Beckman Institute for Advanced Science and Technology. "This is certainly not some trick Harry Potter is playing with."

While materials that can wrap sound around an object rather than reflecting or absorbing it have been theoretically possible for a few years, realization of the concept has been a challenge. In a paper accepted for publication in the journal Physical Review Letters, Fang's team describe their working prototype, capable of hiding an object from a broad range of sound waves.

The cloak is made of metamaterial, a class of artificial materials that have enhanced properties as a result of their carefully engineered structure. Fang's team designed a two-dimensional cylindrical cloak made of 16 concentric rings of acoustic circuits structured to guide sound waves. Each ring has a different index of refraction, meaning that sound waves vary their speed from the outer rings to the inner ones.

"Basically what you are looking at is an array of cavities that are connected by channels. The sound is going to propagate inside those channels, and the cavities are designed to slow the waves down," Fang said. "As you go further inside the rings, sound waves gain faster and faster speed."

Since speeding up requires energy, the sound waves instead propagate around the cloak's outer rings, guided by the channels in the circuits. The specially structured acoustic circuits actually bend the sound waves to wrap them around the outer layers of the cloak.

The researchers tested their cloak's ability to hide a steel cylinder. They submerged the cylinder in a tank with an ultrasound source on one side and a sensor array on the other, then placed the cylinder inside the cloak and watched it disappear from their sonar.

Curious to see if the hidden object's structure played a role in the cloaking phenomenon, the researchers conducted trials with other objects of various shapes and densities.

"The structure of what you're trying to hide doesn't matter," Fang said. "The effect is similar. After we placed the cloaked structure around the object we wanted to hide, the scattering or shadow effect was greatly reduced."

An advantage of the acoustic cloak is its ability to cover a broad range of sound wavelengths. The cloak offers acoustic invisibility to ultrasound waves from 40 to 80 KHz, although with modification could theoretically be tuned to cover tens of megahertz.

"This is not just a single wavelength effect. You don't have an invisible cloak that's showing up just by switching the frequencies slightly," Fang said. "The geometry is not theoretically scaled with wavelengths. The nice thing about the circuit element approach is that you can scale the channels down while maintaining the same wave propagation technology."

Next, the researchers plan to explore how the cloaking technology could influence applications from military stealth to soundproofing to health care. For example, ultrasound and other acoustic imaging techniques are common in medical practice, but many things in the body can cause interference and mar the image. A metamaterial bandage or shield could effectively hide a troublesome area so the scanner could focus on the region of interest.

The cloaking technology also may affect nonlinear acoustic phenomena. One problem plaguing fast-moving underwater objects is cavitation, or the formation and implosion of bubbles. Fang and his group believe that they could harness their cloak's abilities to balance energy in cavitation-causing areas, such as the vortex around a propeller.