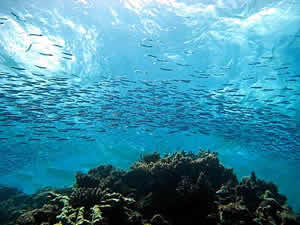 ADELAIDE, Australia -- At first glance it may seem like a good idea to be a fish living the quiet life on a small and isolated reef.

But a team of researchers has found that the opposite is the case on Australia's Great Barrier Reef.

Using 15 years of long-term monitoring data collected from 43 reefs by the Australian Institute of Marine Science (AIMS), the researchers from AIMS and the University of Adelaide have found that fish living on small, isolated reefs face a greater risk of local extinction.

The results have been published in Ecology, the journal of the Ecological Society of America.

"Our results support the idea that small and isolated reefs are more susceptible to local species extinctions because of the tendency for their fish populations to be more variable," says project leader Dr Camille Mellin, a Postdoctoral Fellow from AIMS and the University of Adelaide's Environment Institute.

"Isolated reefs receive relatively fewer 'immigrant' fish from adjacent reefs. If there is a disturbance to the population, such as a cyclone or coral bleaching, fish species on isolated reefs are much slower to recover. These populations are not as resilient to changes and are not easily replenished, increasing their probability of extinction."

By contrast, larger, more populated reefs see fewer large fluctuations in the fish population. This is partly due to the increased competition between species, and partly because of predators, which keep the population size in check.

"Our research suggests that conservation resources might be better allocated to the protection of large, connected habitats," Dr Mellin says.

As a result of the research, a map has been produced predicting the patterns of variability of coral reef fish species on the Great Barrier Reef.

"This new map is a potential new tool for the managers of the Great Barrier Reef Marine Park, but it's important to emphasize that it is just one tool. When making management decisions for the Reef, a whole range of issues needs to be taken into account," Dr Mellin says.

Professor Corey Bradshaw, Director of Ecological Modeling at the University of Adelaide, says the research is "an essential piece in the marine planning puzzle". "If data for other reefs around the world become available, it would be possible to assess threats to species in those parts of the world using the same techniques," he says.

"Our research also demonstrates the need for long-term data sets," says Dr Julian Caley, Principal Research Scientist at AIMS. "This work would not have been possible without AIMS' commitment to the long-term monitoring of the Great Barrier Reef. This dataset is unique in the world and the only one that would have made this study possible."

The Great Barrier Reef is the world's largest reef system, composed of more than 2900 individual reefs and 900 islands stretching for more than 2600 kilometers (1600 miles).