Report: Penguin Poo Adding To Pollution Problem In The Antarctic

Report: Pollution From Marine Vessels Linked To Heart And Lung Disease; 'We Now Have A Benchmark' 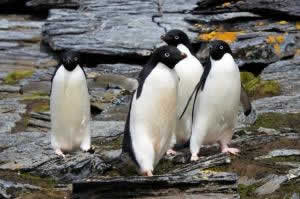 A group of four adelie penguins. (Credit: iStockphoto/Jeff Goldman)Ads by Google Advertise on this site

ANTWERP, Belgium -- Penguin guano in the Antarctic is adding to organic pollutant problems there, according to a report to be featured in a Royal Society of Chemistry publication.

Adrian Covaci at the University of Antwerp, Belgium, and colleagues found unexpectedly high levels of organic pollutants in the soil around a colony of non-migratory Adelie penguins in the Antarctic.

Concerns about organic pollutant levels in the Antarctic have led to intensive studies into how they reach this remote region, said Covaci. The pollutants originate from man-made sources such as organochlorine pesticides and brominated flame retardants, he explained. The routes through which they normally travel are air and ocean currents. Recent studies have shown that migrating birds can also transport organic pollutants to the Antarctic in their body tissues, added Covaci.

Covaci’s study shows that non-migratory penguins are also redistributing organic contaminants on a local scale, resulting in levels 10 to 100 fold higher than expected in the soil around their colonies.

Covaci suggests that penguins are initially exposed to the contaminants by eating polluted fish, which have been contaminated through the food chain. Bioaccumulation means that the penguins have high levels of contaminants in their bodies.

The soil around the colony is then contaminated by penguin guano and carcasses.

The Journal of Environmental Monitoring reports research in Belgium that reveals the problem.