Rare Gold Toothpick And Earwax Scoop Recovered From Florida Shipwreck; 'What A Way To Start The New Season!'

Centuries-Old Gold And Emerald Ring Discovered By Divers Off Florida Coast; 'When You See It, You Just Know It'

The Bounty: $500 Million In Coins Recovered From 'Colonial-era' Shipwreck; 17 Tons, 'Largest Ever' Excavation 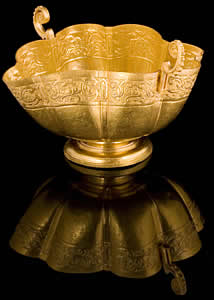 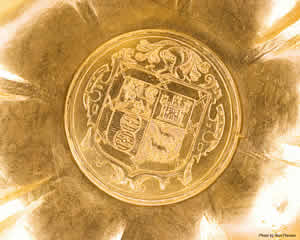 The chalice's intriguing mystery includes a yet to be unidentified coat of arms carved in its base. credit BWVKW

KEY WEST, Florida -- The Robb Report, the definitive luxury lifestyle publication for those who really do have everything, has hit the holiday newsstands with its annual offering of the 21 Ultimate Gifts in the entire world. This year, featured among indulgences that include a $44 million super-yacht and expedition, $20 million backyard home theme park, $9.78 million Bugatti sports car package, $2.5 million fighter jet training and combat battle experience, $1.75 million lion-saving expedition with National Geographic explorersâand other selections of almost unimaginable opulence, luxury and adventureâis the magnificent gold chalice discovered by Keith Webb's Blue Water Ventures on the Santa Margarita shipwreck expedition.

Blue Water Ventures of Key West, joint-venture partner of Mel Fishers Treasures, made world-wide news in June of 2008 with the discovery of the precious and fantastically rare vessel, which has continued to hold sway over public imagination due the intriguing mystery of a yet unidentified coat of arms carved in its base.

In addition to a gripping feature article (pages 204 and 206) about the chalice itself by writer Kirstie Swinnerton, Robb Report Senior Vice President and Editor In Chief Brett Anderson devotes the entire From the Editor page (page 58) to Salvage and Salvation â a background history of the 1622 fleet and its mission, researched and written by Anderson himself.

Offered for the sum of $1.3 million, it is not every day that an artifact of this magnificence is made available for purchase. Proceeds from the sale will fund Blue Water's continued search for the remains of the sunken galleon Santa Margarita.

The Robb Report is available at newsstand. For more information about Blue Water Ventures of Key West, visit http://www.bwvkw.com