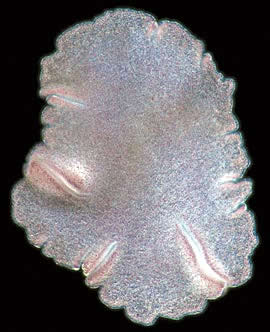 Trichoplax adhaerens, a pancake of cells first discovered on the walls of a saltwater aquarium in the 1880s. credit: Ana Signorovitch/Yale University

BERKELEY, California -- Resembling a smudge more than an animal, a mysterious life form known as a placozoan has now joined other obscure and primitive creatures whose genomes are providing insight into how animals first arose more than 650 million years ago.

Called Trichoplax adhaerens, the creature's genome sequence, reported in the Aug. 21 issue of Nature, has surprised some scientists, who thought the organism was so rudimentary - possibly the simplest free-living animal known - that it had to be the most ancient animal ancestor.

"Because of how simple they look, people hypothesized that Trichoplax represented an early form of animal life. Other people thought they were just simplified cnidarians - jellyfish and hydras," said first author Mansi Srivastava, a University of California, Berkeley graduate student in the Department of Molecular and Cell Biology. "We wanted to figure out where they fit with other animals, in particular the cnidarians, the sponges and more complex animals."

A microscopic pancake only three cells thick and a few millimeters across, Trichoplax looks like a multicellular amoeba. It has a top, a bottom and a one-cell thick interior, and it appears to have no nerve, sensory or muscle cells. It has never been observed reproducing sexually; it usually just splits into two nondescript splotches.

Based on the genome analysis, Trichoplax is not our earliest ancestor, but seems to have separated from the animal lineage after the sponges and before the jellyfish and later "bilaterians" - animals, like humans, whose right and left sides are mirror images of one another.

Though Trichoplax is not at the base of the animal family tree, "comparing its genome with other genomes can tell us what the basic molecular toolkit was in the common ancestor of all animals," Srivatava said.

The Trichoplax genome was sequenced by the U.S. Department of Energy's Joint Genome Institute (JGI) in Walnut Creek, Calif. Over the past few years, JGI researchers have sequenced many basal animal genomes, including those of a jellyfish, sea squirt, choanoflagellate and sea anemone.

"If you want to understand the early origin and diversification of animals, you have to infer this from the fossil record or the genome sequences of animals that lived and diverged early, most of which didn't leave fossils," said senior author Daniel S. Rokhsar, a faculty member at UC Berkeley's Center for Integrative Genomics and program head for computational genomics at JGI.

Placozoans were discovered in 1880 on the glass of a saltwater aquarium and then promptly forgotten until the 1970s, when the late German biologist Karl Grell discovered how to keep them alive and first studied their biology. The strain of Trichoplax sequenced is a direct descendent of Grell's saltwater collection provided by Grell's successor and study co-author, Bernd Schierwater, director of the Institute of Animal Ecology & Cell Biology and head of the Center for Biodiversity at the University of Veterinary Medicine in Hannover, Germany.

Since then, placozoans have been discovered throughout the world's subtropical oceans, mostly near shore and particularly among mangroves. Though various strains have been identified, Trichoplax is the only placozoan species that has been named.

Based on the new sequencing data, the genome of Trichoplax contains 11,514 genes, compared with 20,000 to 25,000 genes in humans. By comparing about 100 of these genes with their homologs in other creatures, the research team was able to construct a tentative family tree for the animals.

Despite the hundreds of millions of years separating placozoans and humans, both still have many of the same genes clustered together in their genomes.

The fact that placozoans have the genes for more complex behavior makes their simple lifestyle all the more surprising. Rokhsar suspects there is much to be discovered about the behavior and lifestyle of these creatures, perhaps even a secret sex life.

"It's remarkable that we have the whole genome sequence but we still know so little about this animal in the wild," he said. "Hopefully, the genome sequence will stimulate more studies of this enigmatic creature."

"Some of our new placozoan species show frequent sexual reproduction, while others never show any signs of sex," added Schierwater. "The genome data allow us to search for the genes responsible for sex and life cycle complexity."

One intriguing aspect of the animal is its feeding style. It eats by sliding atop its food and arching its "back" to create a cavity underneath into which it secretes digestive enzymes. Placozoan eating may be a precursor to the one-way, sac-like gut of jellyfish and other cnidarians, which later evolved into the through-gut of bilaterians, including humans.

"It can make a gut as needed, so it could be the original proto-animal," Rokhsar said.

The Trichoplax project was originally proposed in 2004 to JGI's Community Sequencing Program by Stephen L. Dellaporta of Yale University, one of the authors of the Nature study. Other co-authors include Jarrod Chapman, Nicholas Putnam, Uffe Hellsten, Alan Kuo, Asaf Salamov, Harris Shapiro and Igor Grigoriev of JGI; Jane Grimwood and Jeremy Schmutz of the Stanford Human Genome Center and JGI; Emina Begovic, Therese Mitros and Meredith Carpenter of UC Berkeley; Takeshi Kawashima of the Okinawa Institute of Science and Technology; Ana Signorovitch, Maria Moreno and Leo Buss of Yale University; and Kai Kamm of Hannover's University of Veterinary Medicine.