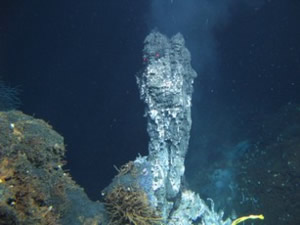 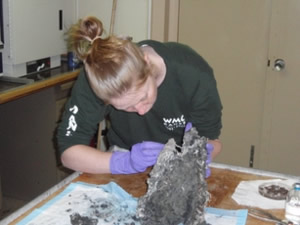 AMHERST, Massachusetts -- Hovering in a tiny submarine 1.4 miles beneath the Pacific Ocean, a University of Massachusetts Amherst microbiologist felt as if he were in a time machine, witnessing the ancient past, or a scientist’s fantasy future. Just inches away, an undersea volcanic vent called a “black smoker” spewed superheated water, hot gases and heavy-metal precipitates out of the Earth’s crust.

James Holden, chief scientist of the most recent oceanographic cruise of the research vessel, “Atlantis,” and its deep-sea submersible, “Alvin,” says he felt like a witness to a time more than three billion years ago before oxygen was present in the atmosphere and before photosynthesis, peering at what microbial life may have been like when the Earth was young. Or, the scene might be a window to the future, when astronauts will look for life near underwater volcanoes believed to exist in the huge ocean on a moon of Jupiter, Europa.

In a paper published this week in the January issue of “Applied and Environmental Microbiology” describing previous work at this site, Holden, with UMass Amherst doctoral student Helene Ver Eecke, and University of Washington oceanographer Deborah Kelley, describe the abundance of three anaerobic microorganisms that grow optimally near 200 degrees F, along with their habitat requirements, based on samples taken near several black smokers.

“To go down to these undersea mountain ranges and see with your own eyes the hot rocks and vents with life forms that grow nowhere else on the planet is a huge thrill,” he says. “To me it suggests that metabolic processes in potential alien microbial life could be the same as the Earth’s, even if the actual cell machinery is different.”

Working in one of the most exotic environments on Earth from the tiny, seven-foot diameter sub, Holden and colleagues have spent the past several years cataloguing groups of anaerobic high-heat-loving microbes. They live in and around black smokers and similar vent types, discovered only within the past 30 years. Some of these microbes eat hydrogen and carbon dioxide and respire or breathe rust to produce magnetic iron. Others give off hydrogen or methane gas. Unbelievably, all thrive in water that’s just short of boiling.

These vents or smokers are found along an undersea mountain range called the Juan de Fuca Ridge about 200 miles off the coast of Washington and Oregon. “We really know very little about what’s living in these very deep areas, basically inside the Earth’s crust,” Holden notes. New microbe species are discovered with almost every visit, the microbiologist says, adding to the excitement of exploration and discovery.

When the high-temperature fluids (up to 675 degrees F) shoot out of the sea floor and hit cold salt water, metal sulfides precipitate out and form deposits around the vents. These special areas host diverse microbial communities – their ecology largely unknown – that thrive in the warm, porous rocks. For example, worms that live on these hot deposits keep fleece-like bacteria on their backs that feed off harsh chemicals in the volcanic fluids, each benefitting from the cooperation.

Holden says the basic science mission of these deep dives includes describing the relative abundance of the microorganisms as “tracers” of chemical and physical conditions not found in the cooler surrounding seafloor. Like a botanist interested in a new strain of wild rose, he wants to know how to recognize the microbes’ favored habitat plus their biological, chemical and physiological relationships with the environment and vice versa. He wants to be able to find these areas again in the vastness of the sea. The UMass Amherst researchers grow a number of these hot-water-loving organisms in the laboratory or “microbial zoo” allowing longer-term study, as well.

In addition, Holden sees possible future exploitation of the microbes’ methane and hydrogen byproducts as biofuels. In fact, one of the goals of his most recent trip in “Alvin” was to measure the volume of methane gas being produced by the microbes and vented through undersea smokers. He says, “I’d love to be able to make a contribution to our country developing more green energy sources and alternative fuels. These microbe communities that can produce hydrogen and methane as natural byproducts of their metabolism hold some promise and might just represent a resource that we can harness in an environmentally responsible way.”