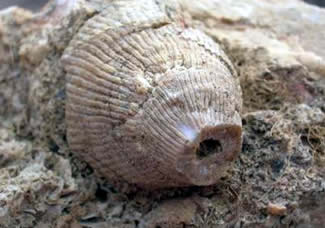 This fossilized shell found on a Bledsoe County farm dates to between 510 million and 340 million years ago, a scholar says.

PIKEVILLE, Tennessee -- In her mind's eye, Beulah Songer can see a vast prehistoric lake stretching from one side of the Sequatchie Valley to the other.

In her vision, a small sea animal lies in the sandy waste that eventually will preserve it in layers of stone. Quiet waves lap against a shoreline that humans in the distant future would call the west side of Waldens Ridge.

With a thumb-size fossil in her hand, Songer wonders how close her imagination is to the ancient world that was home to a sea creature found on her Bledsoe County farm.

This summer, Songer's husband, James, paid their 12-year-old grandson one nickel for each rock removed from their mountainside pasture. While he was earning nickels, the 12-year-old recognized that his rock-loving grandmother might find a pair of the rocks interesting.

Young Maxwell Songer handed over a rock with a fossil embedded in its side, and another rock with what appeared to be an impression made by the same shell.

"He found these two together," Songer said, hefting two hand-size chunks of sand-colored stone, "and he wanted to know if they were anything to keep. He was going to throw them away, but I said, 'No, don't throw that out; that's history.' "

She wanted to learn more about the intact shell-like fossil and how it came to the farm owned by the Songer family for the past 32 years.

Songer's vision of the creature's environment is not too far from the scientific one given by experts, but the overall scene was vastly different, according to Tim Gaudin, head of the University of Tennessee at Chattanooga's biological and environmental sciences department.

The fossilized animal, a horn coral, lived around the world in shallow prehistoric seas between 510 million and 340 million years ago, Gaudin said.

This week he and other scholars looked at photographs of the fossil. Gaudin said the animal is called a horn coral because it's shaped like a horn of plenty.

The horn coral — a solitary, filter-feeding animal — lived on a seabed that was considerably lower than today's Sequatchie Valley floor, he said. The Appalachian mountains had not yet formed, and the environment was tropical.

"Most life then was below the ocean," Gaudin said. "The environment was a little like what we have in the Bahamas today."

"It would look like a coral reef environment. But the animals would look a good bit different," Gaudin said.

Ann Holmes, an assistant professor in the physics, geology and astronomy department at UTC, estimated Songer's horn coral lived on the shallow sea floor about 430 million years ago, during the mid-Paleozoic Era.

In the horn coral's day, the Acadian Mountains were being pushed westward toward a narrow finger of raised land that extended from north to south through the Nashville area to mid-Alabama, Holmes said. A sea spanned the entire area that would become East Tennessee a couple of hundred million years later.

The horn coral's sea bed home hardened to stone over the millions of years, and the force of geological plates colliding created "wrinkles" in the earth's surface bringing to the surface the layer of earth that was the horn coral's home on the sea bottom.