Swordfish Washes Up On Brit Cost; Rare Visitor A 'Tiddler In Global Terms'

Brit Tourists Warned After Seahorse Smuggling Arrests; 'One of the Most Serious Global Problems of Our Time' 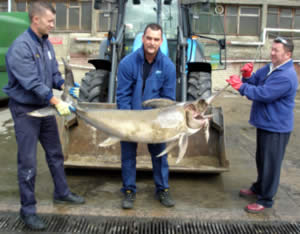 The swordfish is a rare visitor to the Wales coast.

GLAMORGAN, South Wales -- A rare and exotic large fish has been found washed up on the British coast, marine experts revealed today.

A swordfish, measuring six feet and weighing up to 175lb, was discovered dead on Barry Island beach in the Vale of Glamorgan, South Wales, yesterday morning.

The fish was taken to the National Museum of Wales where it was discovered it had already been dead for a few days. As it had been scavenged in the sea, it was not possible to determine what killed it.

Douglas Herdson, information officer at the National Marine Aquarium, said the swordfish was a "tiddler in global terms" as they can reach lengths of up to 16 feet and weigh over 600 kg.

It was only the third swordfish found on the coast of Wales. The first one recorded was off Newport in 1905 while in 2003 one was stranded at Rhossili on the Gower and despite efforts to rescue it, it died an hour later.

There are scattered records of swordfish around Britain since the first one at Margate in 1841. There are few Scottish records with only four or five in the 20th century.

They are probably commonest on the south and west coasts, but do sometimes turn up in the North Sea.

Records held by the National Marine Aquarium show that in 2006 one was photographed near Teignmouth, in Devon and another seen leaping off Dorset.

The same year a small 26 kg one was caught off the Northumberland and the following year an even smaller one was caught south of the Lizard, Cornwall.

Swordfish are typically found throughout the tropical and temperate waters of the world but appear to prefer sea temperatures of 18Â°C to 22Â°C, migrating to cooler waters to feed in the summer.

These oceanic fish chase herring and mackerel and are among the fastest fish reaching 56mph.

Mr Herdson said: "We have phenomenal life thriving in the seas around the Britain, some of the richest areas being off the Welsh coast, west of Scotland and the South West.

"It is great that fish like the swordfish and sunfish are being seen along with the turtles, dolphins and basking sharks. We have wonderful marine biodiversity and must celebrate and protect it."