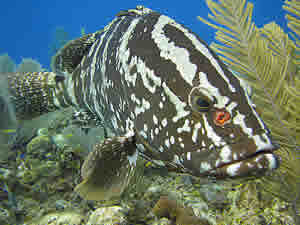 CORVALLIS, Oregon -- Scientists studying the Nassau grouper, an iconic Caribbean reef fish decimated by over-fishing, say it is showing tentative signs of recovery off the Cayman Islands since the government there imposed protective restrictions eight years ago.

However, their research also shows that the groupers' behavior during spawning â and subsequent dispersal of their larvae â may threaten the long-term viability of the species without further protection.

"Nassau groupers form large aggregations to spawn," said Scott Heppell, a fisheries ecologist at Oregon State University. "They are very predictable. The same trait that promotes their reproductive success, however, also makes them extremely vulnerable to fishing. And once their populations diminish, it is hard to rebuild them."

Heppell and his colleagues are working with the Reef Environmental Education Foundation (REEF) and the Cayman Islands Department of Environment on a project to learn more about the Nassau grouper. They are particularly interested in how far the larvae disperse with the currents after spawning â a key factor in Caribbean nations' efforts to rebuild depleted stocks.

As part of REEF's "Grouper Moon Project," the researchers deployed short-term and long-term drifter buoys to see where the currents potentially could carry the larvae. They also tagged several adult fish and set up telemetry sites to track the adults en route to their spawning aggregation â work supported by the Lenfest Ocean Program.

What they've found is that the groupers aggregate during the first full moon after the winter solstice. As many as 4,000 fish will gather at a site west of Little Cayman Island, then spawn some three to eight days later. The timing of their spawning appears driven by currents, said Heppell, an assistant professor in OSU's Department of Fisheries and Wildlife.

"We wondered why the fish waited to spawn after aggregating," Heppell said, "and the buoys appear to have provided the answer. As soon as the currents died down and eddies formed, spawning began. This has the effect of limiting short-term dispersal of larvae and keeps resident fish close to home."

The long-term buoys that were released eventually drifted south, suggesting that some larvae would be carried far from the Cayman Islands. However, halfway through their 45-day journey, the buoys rode currents back to within 100 kilometers of the Cayman Islands.

"The combination of spawning when eddies arrive, and the circular nature of long-term currents has the effect of keeping fish close to home," Heppell said. "The Cayman Islands used to have five spawning sites for Nassau groupers; now there is one. Despite protections, the other sites haven't yet regenerated â and the limited distribution of larvae may be the reason."

Project leaders have started a Baby Grouper Adrift website to track the location of drifter buoys over the next month in an effort funded by the Disney Worldwide Conservation Fund. The public is invited to follow the progress of the researchers at: http://www.reef.org/programs/grouper_moon/adrift/

Nassau grouper are fish that often grace tropical postcards and photographs, and they attract tourists who like to see them while scuba diving. In addition to that cultural benefit, the fish have an ecological role; they are a keystone species that influences the structure of reef communities and promotes coral health.

Scientists estimate that 60 to 80 percent of historic Nassau grouper aggregations have been wiped out from over-fishing. Those populations are slow to rebuild. Groupers don't reach maturity until four to eight years of age, and juveniles are subject to predation by invasive lionfish and other species.

"Ultimately, it is a cultural decision on managing the population," Heppell added. "Is a fish worth more one time on a dinner plate, or being seen a hundred different times by diving tourists?"