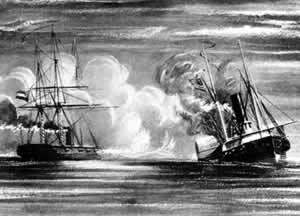 GALVESTON, Texas -- A team of archaeologists and technicians assembled by NOAA will begin today to create a three-dimensional sonar map to document the storm-exposed remains of the USS Hatteras, the only Union warship sunk in combat in the Gulf of Mexico during the Civil War.

The Hatteras, an iron-hulled steamship the U.S. Navy converted into a gunboat, was lost in a battle with the famous Confederate commerce raider CSS Alabama on Jan. 11, 1863, about 20 miles off Galveston, Texas. Largely forgotten, the battle was one of the skirmishes that saw the key southern port of Galveston change hands twice and remain one of the last bastions of the Confederacy.

Today, the wreck of the Hatteras is largely intact, resting 57 feet underwater in sand and silt. Recent hurricanes and storms have removed some of the sediment and sand that once encased the vessel like a time capsule. Shifting sands may once again rebury the Hatteras, and so within a short window of opportunity, the team is assembling to capture all the data it can. Working from a NOAA research vessel and two private craft, the divers plan to deploy high-resolution mapping sonar to create 3-D photomosaics of the Hatteras for research, education, and outreach purposes during the two-day mission.

"With support from the private sector and volunteers, and cooperation with federal and state agencies, this project intends to capture a detailed sonar map of the wreck," said James Delgado, director of maritime heritage for NOAA's Office of National Marine Sanctuaries. "This will create a detailed visual representation of a long buried wreck in murky waters that we can share with the public while also using it to plan for USS Hatteras' long term protection as an archaeological site and war grave."

Listed in the National Register of Historic Places, the Hatteras represents an integral part of the story of the Civil War on the Texas coast. In 1863, the Hatteras was part of the West Gulf Blockading Squadron commanded by Union Rear Admiral David Farragut. The squadron was part of the U.S. Navy's efforts to block the passage of goods, supplies, and arms to and from the Confederacy on the Atlantic and Gulf coasts.

The USS Hatteras is located in federal waters administered by the Bureau of Ocean Energy Management (BOEM) and the Bureau of Safety and Environmental Enforcement (BSEE), but the ship itself is administered by the Navy. The vessel is protected by the Sunken Military Craft Act as a war grave-two of Hatteras crew went down with the ship, and their bodies never were recovered. They are presumed to lie inside the buried hull.

BOEM, working with private cultural resource management firms and the state of Texas, has documented sections of the vessel that protrude above the seafloor. Previously acquired data illustrates the changing nature of the wreck site, and the current level of site exposure presents an exciting opportunity to document the site. "This project will provide an unparalleled view of the wreck site," said NOAA's Delgado, "giving the public a unique 3-D look at the wreck from the safety of a computer screen, while also allowing us to document previously unexplored elements of the wreck."

Funding and support for the underwater archaeology project is being provided by the Edward E. and Marie L. Matthews Foundation, the OceanGate Foundation, and Teledyne BlueView. Participants include NOAA's Office of National Marine Sanctuaries, BOEM, BSEE, the Texas Historical Commission, the U.S. Navy's History and Heritage Command, Tesla Offshore LLC, and private citizens including noted Houston underwater photographer and journalist Jesse Cancelmo, whose reports of the sand moving off the wreck prompted the project. NOAA, which manages Flower Garden Banks National Marine Sanctuary off the Galveston coast, is providing vessel support.

NOAA plans to present results from the mapping mission in Galveston next January during local events marking the 150th anniversary of the sinking of the Hatteras.