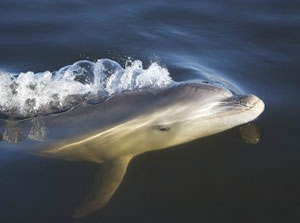 Australian scientists have discovered a new species of dolphin

MELBOURNE, Victoria -- They're one of the most intelligent marine mammals, well known for their inquisitive and playful nature and now, following an amazing discovery by a Monash University researcher, Victoria's dolphins have been formally recognised as a new species.

Kate Charlton-Robb, a PhD researcher in the School of Biological Sciences unearthed the remarkable findings, which have been published in the latest PLoS ONE Journal, showing that coastal dolphins in southern Australia greatly differed from any other dolphin worldwide.

The dolphins were originally thought to be one of the two recognised bottlenose dolphin species, however by using multiple lines of scientific evidence these dolphins were found to be unique. The discovery was made by comparing skulls, external characteristics and a number of DNA regions from the current day population as well as specimens dating back to the early 1900s.

Ms Charlton-Robb has formally named the new dolphin Tursiops australis with the common name, the Burrunan dolphin, being an Australian aboriginal name given to dolphins in the Boonwurrung, Woiwurrung and Taungurung languages, meaning 'large sea fish of the porpoise kind'.

"This is an incredibly fascinating discovery as there have only been three new dolphin species formally described and recognised since the late 1800s.

"What makes this even more exciting is this dolphin species has been living right under our noses, with only two known resident populations living in Port Phillip Bay and the Gippsland Lakes in Victoria," said Ms Charlton-Robb.

This research relied in large part on the analysis of dolphin skulls collected and maintained by museums over the last century including the extraordinary holdings at Museum Victoria.

"Ms Charlton-Robb's discovery is an exciting example of a recent trend in biodiversity research across Victoria and Australia. Through the careful application of emerging technologies to museum specimens, researchers are revealing that our biological heritage is far more diverse than we realise." said Dr Rowe, Museum Victoria's Senior Curator of Mammals.

Ms Charlton-Robb said it is important this study continues in order to conserve and protect the Burrunan dolphin for future generations. More research is required to determine if there are other resident populations of this species in Australia.

"We know these unique dolphins are restricted to a very small region of the world, in addition the resident populations are very small with only approximately 100 dolphins in Port Phillip Bay and 50 in the Gippsland Lakes.

"This study highlights the importance of taking a more holistic approach of using multiple analyses, rather than looking in isolation of one scientific methodology. Even though we have progressed a long way in science, this study shows there are still new and exciting discoveries to be made," said Ms Charlton-Robb.